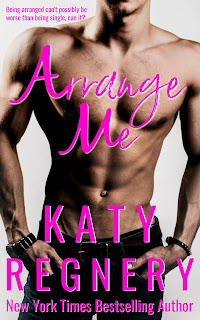 Katy Regnery’s back with an all-new duet entitled Arranged, taking on what looks to be the new “in” romance trope that is arranged marriages. At twenty-nine, Courtney Jane Salinger is done with the dating game, what with putting in all that time and effort for no guarantee of finding love. Her latest failure of a date and a glimpse at a reality show has her signing up for an arranged marriage. Maybe it’s insanity, maybe it’s desperation, but maybe, just maybe, this could be Courtney’s perfect opportunity to get exactly what she wants—marriage, a family, a home—because nothing could possibly be as terrible as wading through the world of singlehood. Right?

I originally thought that the whole arranged marriage thing was similar to a reality show I’ve seen on television once, Married at First Sight, but the setup that financial analyst Courtney actually goes through isn’t filmed. I think that her being so close to hitting thirty and still not finding “the one” had her frustrated and looking for an alternative, and hey, sometimes, it’s those perceived failures in life that have us pushing for something different, and different can oftentimes lead to the greatest of adventures. Now, the timing of Courtney’s decision is what proves to be really interesting because it’s when she finally pays closer attention to what’s been in front of her this whole time—aspiring playwright and bartender Josh Dalton—and he’s definitely noticed Courtney.

Now, this book is just the first a new duet, so yes, it does end in a cliffhanger of sorts. Don’t worry, it’s nothing that I would label “evil” but Courtney doesn’t necessarily get the happy ending that she’s been hoping for here. To call her situation “complicated” would be an understatement, but the second books is already scheduled for release in May 20th. I’m looking forward to seeing how everything gets resolved: Courtney’s plan for an arranged marriage, whether there’s something more to her thing with Josh, and if reality trumps fantasy or vice-versa. 4.5 stars for Arrange Me. ♥

Purchase Arrange Me on Amazon.