Book Spotlight: It's Getting Scot in Here by Suzanne Enoch 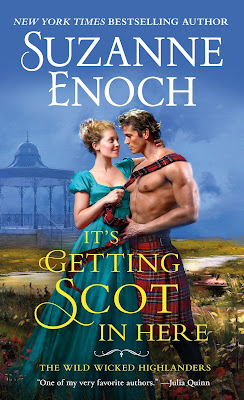 About It's Getting Scot in Here
The first in a wickedly seductive new Scottish historical romance series from New York Times bestselling author Suzanne Enoch!

London socialite Amelia-Rose Baxter is nobody’s fool. Her parents may want her to catch a title, but she will never change who she is for the promise of marriage. Her husband will be a man who can appreciate her sharp mind as well as her body. A sophisticated man who loves life in London. A man who considers her his equal—and won’t try to tame her wild heart...

Rough, rugged Highlander Niall MacTaggert and his brothers know the rules: the eldest must marry or lose the ancestral estate, period. But Niall’s eldest brother just isn’t interested in the lady his mother selected. Is it because Amelia-Rose is just too. . . Free-spirited? Yes. Brazen? Aye. Surely Niall can find a way to soften up the whip-smart lass and make her the perfect match for his brother for the sake of the family.

just got a whole lot hotter.

Instead it’s Niall who tempts Amelia-Rose, despite her reservations about barbarian Highlanders. Niall finds the lass nigh irresistible as well, but he won’t make the mistake his father did in marrying an Englishwoman who doesn’t like the Highlands. Does he have what it takes to win her heart? There is only one way to find out...

Add It's Getting Scot in Here on Goodreads.

An Excerpt from It's Getting Scot in Here
Prologue

Once upon a time—in May 1785, to be exact—Angus MacTaggert, Earl Aldriss, traveled from the middle of the Scottish Highlands to London in search of a wealthy bride to save his well-loved but crumbling estate. Aldriss Park had been in the MacTaggert family since the time of Henry VIII, when Domhnall MacTaggert, despite being Catholic and married, declared publicly that Henry should be able to wed as many lasses as he wanted until one of them got him a son. Aldriss Park was the newly minted earl’s reward for his support and understanding.

For the next two hundred years Aldriss thrived, until the weight of poor harvests, the ever-intruding, rule-making Sassenach, and the MacTaggerts’ own fondness for drinking, gambling, and wild investments (including an early bicycle design wherein the driver sat between two wheels; sadly, it had no braking mechanism and after a series of accidents nearly began a war within the MacTaggerts’ clan Ross) began to sink it into disrepair.

When Angus inherited the title in 1783, he realized the old castle needed far more than a fresh coat of paint to keep it from both physical collapse and bankruptcy. And so he determined to go down among the enemy Sassenach and win himself a wealthy bride. The English had made enough trouble for him and his over the centuries, so they could bloody well help him set things right.

On his second day in London, he met the stunning Francesca Oswell, the only offspring of James and Mary Oswell, Viscount and Viscountess of Hornford—who had more money than Midas and a bevy of very fine solicitors—at a masked ball where he dressed as a bull, and she as a swan. Despite the misgivings of nearly everyone in Mayfair, Angus and Francesca immediately fell madly in love, and married with a special license ten days later.

A week after that, Angus took Francesca back to Aldriss Park and the Highlands, where she found very little civilization, a great many sheep, and a husband who preferred brawling to dancing, and he discovered that her father’s solicitors had arranged to keep the Oswell family money in Francesca’s hands. This made for some very spectacular arguments, because there is nothing more combustible in the world than an impoverished Highlands laird in disagreement with an independently wealthy English lady about his own ancestral lands.

Over the next thirteen turbulent years the estate prospered, and Francesca gave Angus three sons—Coll, Aden, and Niall—and with each one became more concerned that this was not a life for any civilized person. She wanted to bring the boys back to London for proper educations and to live proper lives, but Angus refused, stating that what had been good enough for him would be good enough for his lads.

When a fourth child, a daughter, arrived in 1798, Francesca reached her breaking point. No daughter of hers was going to be raised with an uncivilized accent in a rough country where she would be ridiculed by proper Society and unfit to marry anyone but a shepherd or a peat cutter. Angus refused to let his lads go, but he allowed Francesca to take young Eloise and return to London—on the condition that she continue providing for the maintenance of the estate.

Francesca reluctantly agreed, but given that she controlled the purse strings, she had her own conditions to try to keep some influence with her wild sons: All three boys must marry before their sister, they must wed proper Englishwomen, and at least one of them must marry someone of her choosing.

She knew Angus would raise them as he pleased, but they were her children, too, by God, and she meant to see to it that they had some semblance of propriety in their lives—she was a viscount’s daughter, after all, and certain things would be expected of her offspring. She refused to allow them to be viewed as unsophisticated wild men by her London neighbors, and she remained determined to have a presence in their lives.

To enforce her will, she convinced (or rather, coerced) Angus to put his signature to the agreement, which contained this provision: If young Eloise MacTaggert did marry before any of the boys, Francesca would cut off all funds to the estate. If they were to insist on defiance, they would have a heavy price to pay for it—one they and their tenants could not afford.

Angus had no choice but to agree, and considering that Coll, the oldest, was only twelve at the time of Francesca’s departure and Eloise was but a wee bairn, he was willing to wager that he would have time to renegotiate. Angus and Francesca remained married, but neither would bend enough to visit the other ever again. As far as the lads were concerned, their mother had abandoned them.

In the spring of 1816 Angus received a letter from Francesca announcing their daughter’s engagement, and he promptly collapsed. He’d hoped his sons would have found themselves Scottish lasses by now and shown their mother she couldn’t control their lives after all, but the lads were defiant and wouldn’t be rushed. Now it appeared to be too late.

He summoned his sons to his apparent deathbed and confessed all—Francesca funding the estate, the pernicious agreement, and their mother’s grasping claws, which he explained was a symptom of all Englishwomen and their weak, clinging, cloying ways. For the sake of the property and their tenants the young men must go to London. At once. No sense even taking time to put him in the ground, much less mourn him, because Francesca wouldn’t excuse the loss of time, and they needed to marry before their sister.

The lads—grown men, now—were not at all happy suddenly to learn about the responsibilities and rules foisted upon them by a woman they barely remembered. Being wily, freehearted, and exceptionally handsome men accustomed to doing things their way and certainly not bowing to the demands of a demented Englishwoman, they determined to go down to London not to comply, but to outwit their mother and upend any plans she had for them. And thus, dear reader, begins our story.

Suzanne Enoch grew up in Southern California, where she still balances her love for the Regency romances of Georgette Heyer and classic romantic comedies with her obsession for anything Star Wars. Given her love of food and comfy chairs, she may in fact be a Hobbit. She has written more than 35 romance novels, including traditional Regencies, Historical Romance, and contemporary Romantic Suspense. When she isn’t working on her next book she is trying to learn to cook, and wishes she had an English accent.

She is the bestselling author of Scandalous Brides series, The Scandalous Highlanders series, and One Hot Scot.