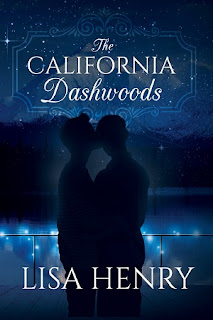 For the record, I've never read Jane Austen's Sense and Sensibility, although I do know what the story is about, thanks to the award-winning 1995 Ang Lee-directed film version--and one of my favorite movies of all time--starring Emma Thompson, Kate Winslet, Alan Rickman, and Hugh Grant. Is reading the original novel a requirement in order to enjoy Lisa Henry's The California Dashwoods? To be perfectly honest, I think that knowing what the original story will aid in having a better appreciation for this modern re-imagining of the literary classic. And hey, if you don't want to read the Austen book, I'm highly recommending you watch the movie adaptation that I mentioned. Whether you go with the book or the movie, I guarantee you wont regret it.

After the death of his beloved father, Elliott Dashwood, along with his mother and sisters, find themselves with very little money and no place to live, having basically been left with no other alternative by his relatives than for them to head to California to start anew. But right before they're set to leave, Elliott meets Ned Ferrars, one of his half-brother's brothers-in-law. They share an unforgettable moment together, but that all it can ever be--a moment. It's not as if Elliott expects to have some sort of fairy tale ending to something that was nothing more than a quick fling. Especially not after he learns of the secret that Ned has been keeping. But the hearts wants what it wants, and in the case of Elliott, his heart wants and needs Ned. Can sensible Elliott make sense of it all?

I've read a few of Lisa Henry's other books, including her co-authored ones with J.A. Rock, in the past, and when I heard that she was one of the authors who was putting her own take on a classic piece of literature, I was excited. The result certainly lived up to my expectations, what with an M/M story that, at its very core, doesn't veer too far off of the original Austen work. This is a story of love, but not just of the romantic sort. The title itself clues you in on this being about family--the Dashwoods--and how they try to move on with their lives in California after the passing of the patriarch. Elliott and Ned's romance felt secondary, but again, this is why I think it's best if you go into The California Dashwoods knowing what Sense and Sensibility was about. 4.5 stars. ♥

Purchase The California Dashwoods on Amazon.