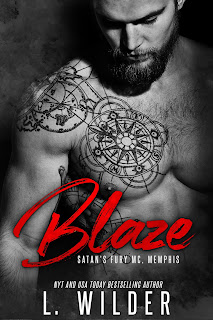 L. Wilder's Satan's Fury MC: Memphis spin-off series starts of with a blaze of glory (pun intended!) in Blaze, which features single father and Satan's Fury member Sawyer Mathews, the eponymous title character, and emergency room nurse Kenadee Brooks. Some of the members of the Memphis chapter of this motorcycle club have been featured in the original Satan's Fury MC series, but you don't necessarily need to read it in order to fully enjoy and understand this spin-off starter (although the series as a whole was a fun read). This first book surprised me with the turn of events involving the club itself, which was rather heartrending yet has already made it a standout read.

After losing his ol' lady to a car crash and watching his son go through the ravages of leukemia, Sawyer Mathews has his priorities straight. As a member of Satan's Fury with the road name of Blaze, his club, his son, and his parents are the most important things in his life. That doesn't mean, however, that he doesn't hope to someday settle down with someone--a someone who could well be Kenadee Brooks, the girl who caught his attention in a diner. When Kenadee turns out to be the nurse tending to his son Kevin after an accident, Blaze doesn't let the opportunity go to waste. However, when the club is targeted by an unknown group, will Kenadee be able to accept the kind of life that a club member like Blaze leads or will the both realize that she isn't cut for life in Satan's Fury?

From the romance between Blaze and Kenadee to the action with the club as they try to figure out who's targeted them, this series starter lived up to my hopes and expectations for it. There's one particular part in the story involving the club that did make my heart squeeze in my chest, but I also understood that it was necessary in order to show how serious the situation was for everyone concerned. I loved Blaze's interactions with Kevin and with his parents, showing that even though he's a hardcore member of a motorcycle club, his son always came first and he loved his parents beyond measure. Kenadee was such a refreshing change from the mostly helpless females that you find in MC romances. She wasn't one who sat idly by agreeing to everything her man and his club told her. Overall, Blaze was a really great read and it left me looking forward to the rest of this new spin-off series. 4.5 stars! ♥