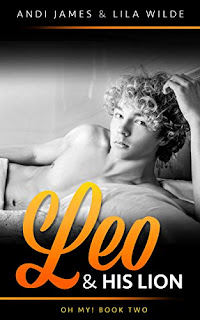 I enjoyed Andi James and Lila Wilde's Teddy & His Bear so when the opportunity to read and review the second Oh My! novel came along, there was no way I was going to pass it up. Leo Varma and Dylan Drake-Matthews were introduced in the first book, and now they get their own story told in Leo & His Lion. I've read several stories that have involved puppy play, but this was my first that had to do with kitty play, so my curiosity was certainly piqued. I also wanted to see if I would love this book as much as I did the first one.

Thirty-seven-year-old pediatric dentist Leo Varma is very much gay and very much likes his kink. He also happens to be very much in the closet. When he starts to fancy nineteen-year-old pansexual barista Dylan Drake-Matthews, he knows doing anything about it would be a mistake. Dylan is sweet and thoughtful, albeit a tad clumsy and impulsive, and he's quite smitten with Leo. So when Dylan decides to explore his submissive side, Leo hesitates to offer being his dominant, but he can only resist for so long. Even as Leo gives in to his feelings and desires, he knows there's one thing he cannot give Dylan: being out in the open.

Compared to the first book, this second one proved to be a wee bit more frustrating. Leo may be nearing forty but he was hiding his sexuality from his very conservative Indian family, and Dylan was mostly endearing but did cross over to being exasperating at times. It felt like forever before Leo came even close to considering coming out of the closet--thus the frustrating part. I'm not entirely sure if Dylan really is a sub since he seemed to only fully submit with Leo, so maybe it's like a submissive-for-you sort of thing.  I did like the kitty play aspect of the story, although I do wish there had been more of it in the story. Even with the frustrating parts, I still enjoyed Leo & His Lion as a whole and can't wait for book three. Four stars. ♥

Read my reviews for the Oh My! series:

Purchase Leo & His Lion on Amazon.