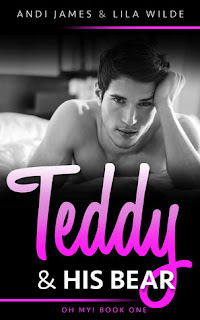 Teddy & His Bear is the first novel in the Oh My! series penned by the writing duo of Andi James and Lila Wilde. The ageplay story is about twenty-four-year-old graphic designer Theodore Mason and forty-two-year-old concierge doctor Barrett (whose last name I don't recall being mentioned). After two years of being in a relationship with two men, Teddy finds himself the odd man out, leaving him without the boyfriends who thought were as committed to him as he was to them and without a home. When one of his favorite customers at the coffee shop he works at notices how sad and heartbroken he is and summarily offers Teddy the garage apartment in his home, Teddy is shocked but grateful at Barrett's generosity and kindness. Maybe Barrett's generosity was above and beyond the norm, but there was something about the younger man that made Barrett want to take care of him. As drawn as he is to his new tenant, Barrett refuses to entertain the possibility of having Teddy be his baby boy, not when his last relationship ended so badly. But what if Teddy hopes he gets his Bear to be his Daddy too?

This was a wholly entertaining ageplay read, one that didn't rush the whole sexual component of the relationship between the main characters, allowing instead for an honest-to-goodness friendship of sorts to flourish between the two men. Both Barrett and Teddy are dealing with their own experiences of heartbreak--although Barrett's was several years ago compared to Teddy's far more recent one--yet they were considering the whole Daddy/boy arrangement with different attitudes. I think they were guys who simply wanted someone to love them and to accept the love they had to offer in return. I did enjoy the book in general, but I must admit that there were numerous times where Teddy came off as way more naive than I thought was believable. It would have made sense if he was doing the whole ageplay scenario 24/7, but even in regular instances, whether it be with Barrett or his own set of friends, Teddy seemed to be more boy than man in terms of how he handled situations. Still, I did like the romance between the two and am curious about the peripheral characters. Four stars for Teddy & His Bear. ♥

Purchase Teddy & His Bear on Amazon