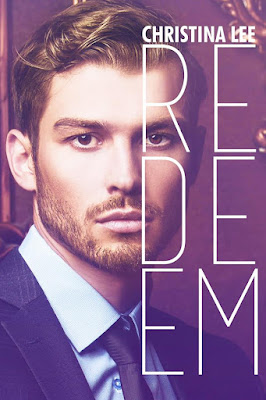 About Redeem
Successful financial analyst Michael Walsh leads a picture-perfect life that anyone would envy—unless they caught a glimpse beneath the surface. Haunted by failed relationships and self-doubt, Michael harbors a soul-deep loneliness that no number of casual hookups can fulfill. So why can’t he stop thinking about his New Year’s fling with a man whose quiet desperation matches his own?

Barista Stewart Jenkins has an abysmal track record with relationships, and no matter how hard he tries to keep things tightly under wraps, his life is spinning out of control. His hookup with the gorgeous Michael was only supposed to be sex—hot, dirty, and uncomplicated—but that small taste leaves him desperate for more.

Every no-strings encounter that follows between Michael and Stewart peels away more layers, blurring the lines between them, until they’re left with a raw tenderness and acceptance they’re both urgently craving. A relationship absolutely wouldn’t work on paper; they come from drastically different lives and are plagued by inexcusable sins. All that vulnerability is sure to reveal old wounds, and forgiveness seems so far out of reach unless they can find a way around their fears on the road to redemption. 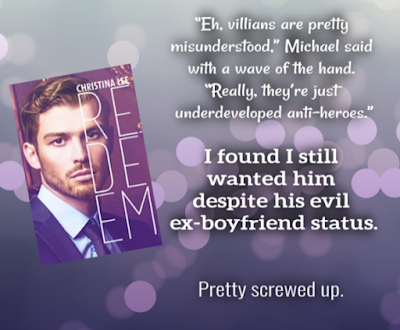 Read my five-plus-starred review of Redeem.

Find the Under My Skin series on Goodreads. 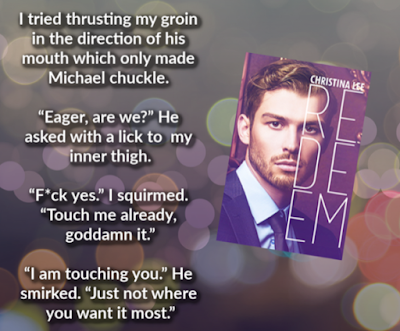 An Excerpt from Redeem
“Ah, hell, that’s good,” I gasped as he stroked upward while simultaneously sucking on my neck. I probably should’ve protested because he was sure to leave a bruise, but I couldn’t find it in me to care. Besides, it would be a marker of this night. Like a sexy brand.

His breaths grew heavier, and his chest rumbled in deep pleasure as he jerked sloppily against me. His hand stayed firm and tight on my cock even as he drew back and shuddered out his release. The sound was so sensual that my orgasm slammed through me at nearly the same time.

“Holy fuck.” My body grew limp as my come spilled over his hand and onto the floor. I shut my eyes and kept my head anchored against the wall as he released his grip and my shaft pulsed in response.

The quiet in the room grew deafening—the only sound our breaths and the muted noises of the crowd outside the door.

“You got a name?” I didn’t know why I said it out loud. It was only a fleeting thought through my mottled brain.

“Why the fuck does it matter?” he replied as the sound of his zipper cut through the echoing silence. “Not like I’ll ever see you again.”

“Dunno.” My cheeks flushed red, so I kept my head buried in my arm. “Maybe when I yank on my cock later, replaying this scene in my head, I can call you something.”

He didn’t respond. I heard him straightening his clothes and then pulling a few paper towels, which he forced into my hand. “Michael,” he mumbled against my ear.

And then he was gone. 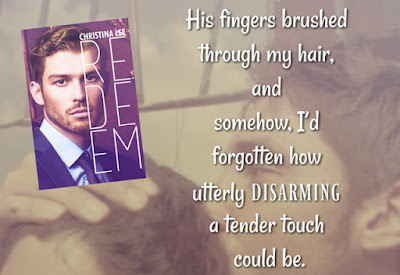 Now Christina lives in the Midwest with her husband and son—her two favorite guys. She's been a clinical social worker and a special education teacher. But it wasn't until she wrote a weekly column for the local newspaper that she realized she could turn the fairytales inside her head into the reality of writing fiction.

She writes Adult, New Adult, and M/M Contemporary Romance. She's addicted to lip gloss and salted caramel everything. She believes in true love and kissing, so writing romance novels has become a dream job.