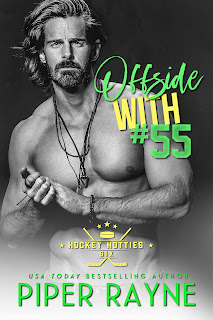 Note: An advance reader copy (ARC) was provided by the authors via Valentine PR.
Talk about ending this series on such a high! The bestselling writing duo of Piper Rayne went into their Hockey Hotties series taking on the sport romance genre, and dare I say that they did a fabulous job with it. Six novels and two novellas later, they're closing things out with an office romance of sorts. If you've read the fifth book, Second Shot with #76, then it's no secret that this final Hockey Hotties story is about Kane Burrows and Jana Gerhardt, the former being the Florida Fury's veteran player and the latter part of the team's management. Another thing that isn't as much of a secret as these thirty-somethings thought it was is the fact that they were hooking up. A lot. But Jana has always made it clear that she isn't looking for anything more than casual with Kane, and now that her father has decided to retire and hand over the reins of team ownership over to her and Kane has retired and been announced as the Fury's new head coach, the more crossing that line would be a foolhardy idea. However, nothing has ever truly felt casual between them.
I knew going into this book that it was going to take a lot for me to thing Jana was someone worthy of Kane. She wasn't exactly someone who inspired warmth, but Piper and Rayne helped me see her in a different light, one that wasn't quite so harsh, allowing me to get to know the truest version of Jana. I'm not saying that Kane was some sort of bastion of perfection. The guy had his share of faults and shortcomings, but between the two of them, it was Jana who consistently pressed for a no-strings-attached type of arrangement. I totally enjoyed seeing Kane and Jana learn to traverse the tightrope that was their new professional relationship while coming to terms--more on Jana's part than Kane's--with the fact theirs was a connection that deserved a chance to flourish. This being the end of the series, it had a bittersweet feel by the time we reached the end, but seeing how far all the Hockey Hotties couples have come still left me happily satisfied. Also, make sure to grab the bonus epilogue because it was the cherry on top. Five stars go to Offside with #55.
---------------------------
Read my reviews for the Hockey Hotties series: