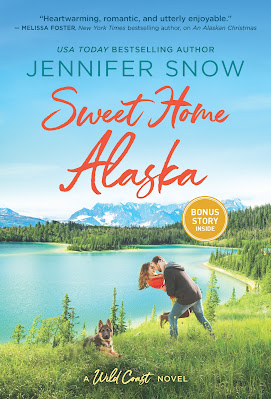 Sweet Home Alaska
(Wild Coast #1)
by Jennifer Snow
Release Date: May 24, 2022
HQN Books
About Sweet Home Alaska
When old feelings resurface, will the truth bring them back together?
Skylar Beaumont never wanted to return to Alaska. Still, when duty calls, she can’t refuse. And, as a third-generation “Coastie” and the only female captain in the local coast guard, she has too much to prove. Being stationed in her hometown of Port Serenity isn’t ideal—but she’ll tough it out until her transfer goes through and she can move on to warmer waters. That’s the plan, at least, until she crashes into Dex Wakefield. Again.
Shocked to see his secret high school sweetheart after all this time, Dex can’t help but wonder if he should finally come clean. Skylar deserves to know the real reason why he abandoned the dream they’d shared—and broke her heart. But this small tourist town is home to one big grudge where their families are concerned… And leaving the past behind might be the only way Dex and Skylar will finally realize that their first love deserves a sweet second chance.

Jennifer Snow is a USA Today bestselling author and screenwriter of contemporary romance and thrillers. Her novels have won awards and received starred reviews from Publishers Weekly. Mistletoe & Molly, a romcom adapted from her novella, aired on UPTV and Super Channel, and she has four new films airing in 2022.
A Canadian living in Torrevieja, Spain with her husband and son, she loves to travel and spend time near the ocean.
Connect with Jennifer
Website | Facebook | Twitter | Instagram | Goodreads