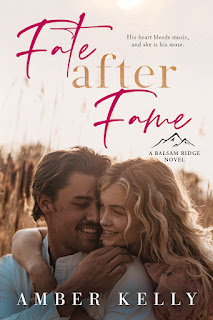 Note: An advance reader copy (ARC) was provided by the author via Wordsmith Publicity.
Author Amber Kelly takes us back to Balsam Ridge in Fate After Fame, the second book in her small-town romance series set in the fictional Tennessee town that shares the same name as the series. This is Ansley Humphries and Garrett Tuttle's story, the two having been high school sweethearts who once believed as long as they were together, two seventeen-year-olds who trusted that anything was possible with love. But that was before Garrett left Ansley waiting for him in a rundown motel, breaking her heart in the process. A decade and a half later, Garrett is a country music star dealing with the downside of fame. Left with no other option but to return to his hometown of Balsam Ridge and keep his head down, he knows he's going to cross paths with the only girl he's ever loved sooner or later. But while he may be looking forward to seeing her again, Ansley has nursed the hurt that he left her with all those years ago. He may have found fame in Nashville while she went on to become their town's librarian, but could fate be giving them a second chance?
I'm just going to put this out there: I was not a fan of Garrett's for a good portion of this book. And no, it had nothing to do with the fact that he was with other women post-abandonment of Ansley. I'm not the sort of reader that requires their main characters to be celibate and free of other romantic or sexual entanglements after the break-up. I understood Garrett's reasons for deciding to end things with Ansley when they were seventeen, but the idea of him leaving her to her own devices was definitely a black mark on him. On the other hand, I loved Ansley. She was obviously able to bounce back from the end of her relationship with Garrett, thriving in her chosen career and surrounding herself with people who loved and supported her. Good on her for giving Garrett a run for his money. All in all, I enjoyed this second-chance romance and am looking for book three. Four stars for Fate After Fame.
--------------------------
Read my reviews for the Balsam Ridge series: