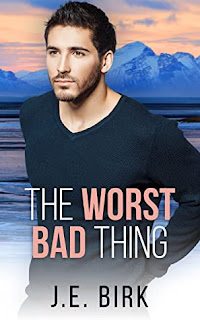 Note: An advance reader copy (ARC) was provided by the author.
Originally published in 2016 by Dreamspinner Press, The Worst Bad Thing has just been re-released by the author, J.E. Birk. This is a pretty angsty read with the two main characters meeting in Iceland and then traveling on to England and France afterwards. When twenty-five-year-old James Tate O'Reilly made the decision to leave for Europe, he had a roadmap of sorts to guide him. His itinerary did not, however, take into consideration a chance meeting with another traveler and fellow American--Gabriel Carrillo. The thirty-something former Army Ranger turned private security specialist knows his way around the countries that Tate is visiting for the first time. But this is no ordinary trip for Tate. There's a purpose to the locations he's headed to. The one thing he wasn't prepared for was Gabriel wanting to save him. But Tate doesn't want to be saved.
It's a book like this one that proves that you can, indeed, have notable character and story development regardless of the number of pages. This isn't my first J.E. Birk read either, having Dating Ryan Alback and Booklover in the past, so I know what this author is capable of. Dare I say that The Worst Bad Thing is just about the best good thing I've read from Birk. I've enjoyed my previous reads from her, but this novella is, hands down, is my favorite. It isn't an easy read, particularly when we see what happened a year ago via the flashbacks. Both Tate and Gabriel were remarkable main characters, but I need to note that the supporting cast left quite an impression on me as well. I never got to read the original edition of this book, so I cannot compare it with this one, but either way, The Worst Bad Thing is a five-star read.
Note: If multiple deaths, albeit accidental, and thoughts and plans of suicide are known or potential triggers for you, I humbly suggest you skip this book. As fantastic as J.E. Birk's writing may be here, one's mental and emotional health should always take precedence.
Re-Release Date: 24 May 2022
Date Read: 20 May 2022
Learn more about J.E. Birk.
Pre-order The Worst Bad Thing on Amazon.