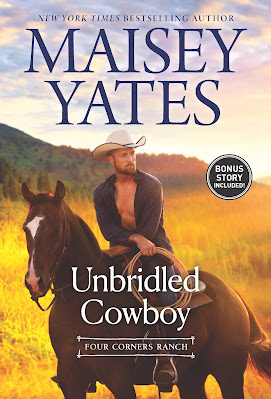 Unbridled Cowboy
(Four Corners Ranch #1)
by Maisey Yates
Release Date: May 24, 2022
HQN Books
About Unbridled Cowboy
Welcome to Four Corners Ranch, where the west is still wild…and when a cowboy needs a wife, he decides to find her the old-fashioned way.
Cowboy Sawyer Garrett has no intention of settling down. But when he becomes a single dad to tiny baby June, stepping up to the responsibility is non-negotiable. And so is finding a wife to be a mother to his infant daughter. So he decides to do it how the pioneers did: He puts out an ad for a mail order bride.
Evelyn Moore can’t believe she’s agreed to uproot her city life to marry a stranger in Oregon. But having escaped one near-disastrous marriage, she’s desperate for change. Her love for baby June is instant. Her feelings for Sawyer are more complicated. Her gruff cowboy husband ignites thrilling desire in her, but Sawyer is determined to keep their marriage all about the baby. But what happens if Evelyn wants it all?

Maisey Yates is a New York Times bestselling author of over one hundred romance novels. Whether she's writing strong, hardworking cowboys, dissolute princes or multigenerational family stories, she loves getting lost in fictional worlds.
An avid knitter with a dangerous yarn addiction and an aversion to housework, Maisey lives with her husband and three kids in rural Oregon.
Connect with Maisey
Website | Facebook | Twitter | Instagram | Goodreads