Review: Only Rivals by Charity Ferrell (Only You #1) 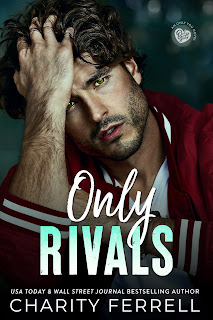 Note: An advance reader copy (ARC) was provided by the author via Wordsmith Publicity.
The angst is real! I make no secret of my addiction to angst in the books I read, although I don't necessarily need it in every single one of them. Naturally, the angst needs to fit the story because angst for the sake of angst is something I'm not quite a fan of. If anyone knows how add just the right amount of angst (and I've just realized how many times I've said that word over the span of four sentences) to her stories, it's Charity Ferrell, and she has a just released romance series, Only You, which marks a return to Blue Beech, Iowa.
Only Rivals is an enemies-to-lovers romance featuring Amelia Malone (daughter of Lola Delgado and Silas Malone from Last Round, book five in the Twisted Fox series) and Jaxson Bridges (son of Sierra Lane and Maliki Bridges from Just Roommates, book five in the Blue Beech series). Jax was the first boy Amelia ever hated; his best friend, Christopher Simpson, was the first guy she ever loved. Six months ago, they lost Chris. Still saddled with overwhelming grief over Chris and undeniable animosity towards each other, these two are forced to continue his legacy as a team--the Down Home Brewery. Amelia and Jax were rivals for what felt like forever, but could their forever be together?
Talk about a heartrending read! This series starter gave me the feels, and I'm not just talking about the swoony kind. It was clear from the get-go that Amelia and Jax had their issues, some petty, but quite a bit more deeply rooted. The hate was real with these two, but they had a complicated bit of history. I felt for them because they truly were still grieving the loss of Chris. I don't want to give too much of the story away, but suffice it to say that once they had no choice but to work together at the brewery, things got oh-so-interesting indeedy. Only Rivals has gotten the Only You series off to a great 4.5-star start!
Date Read: 15 May 2022
Learn more about Charity Ferrell.
Purchase Only Rivals on Amazon | Apple Books | B&N | Kobo.