Review: Mine to Have by Natasha Madison (Southern Weddings #1) 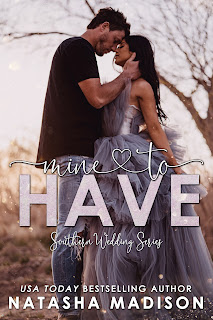 Note: An advance reader copy (ARC) was provided by the author via Wildfire Marketing Solutions.
Mine to Have is the first full-length novel in the new Southern Weddings series, which is a spin-off of the Southern series, from bestselling author Natasha Madison. There is a free prequel novella, Mine to Kiss, which you don't necessarily need to read in order to fully appreciate this new release, but hey, a freebie that serves as introduction to this first couple sounds like a risk-free thing to me, so go for it. The aforementioned couple is Harlow Barnes and Travis Baker, and yes, Harlow is Olivia and Casey Barnes's daughter and youngest child and their story is Southern Comfort, the second book in the Southern series. I'd been looking forward to starting this series since the author made the announcement, and then doubly so when I read the prequel. Add to that the fact that I am one of those readers that loves a second generation-type of spin-off!
When Harlow Barnes promised Travis Baker that she would be there for him on the happiest day of his life, they were young college students who were very much in love. So, when she finds his wedding invitation in her mailbox, she's taken aback. Four years may have passed since he ended things between them, but a promise was a promise and it was one that Harlow intended to make good on--even if meant seeing the only guy she's ever loved commit his life to someone else. But for Travis, this day didn't feel like the happiest; if anything it was as if Fate was conspiring against him, with one thing after another wreaking havoc on his wedding day. Then he sees Harlow, and Travis can't help but wonder if  Fate's telling him she was his to have.
Okay, I'm going to be honest here and admit that I was a wee bit worried Harlow and Travis's story was going to fall short of my expectations. I thought Travis had it a tad too easy with Harlow soon after the clusterfuck that was his non-wedding. But nope, Natasha Madison restored my faith in her because of how Harlow decided to handle things. I always need a fair amount of groveling and wooing on the part of the person who did the breaking up, no matter how selfless their motives may have been. I loved that Harlow and Travis went into this second chance at being together with maturity and having learned to take a breath and see things from each other's perspectives and to listen and not just assume. Having some of the other couples from the original Southern  series was a real bonus, making for an even more awesome read. 4.5 stars for Mine to Have.
Release Date: 31 May 2022
Date Read: 22 May 2022
Learn more about Natasha Madison.
Pre-order Mine to Have on Amazon | Apple Books | B&N | Kobo.