Review: The Project by R.L. Mathewson 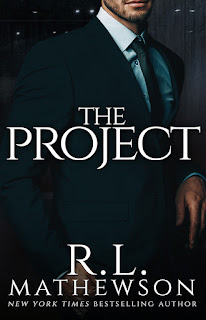 Note: An advance reader copy (ARC) was provided by the author via Wildfire Marketing Solutions.
R.L. Mathewson is a kinda-sorta-maybe new-to-me author. I know that sounds weird, but I say that because I actually have seven of Mathewson's much earlier books and they've been languishing in my Kindle for years. This is what happens when you're a book hoarder. So, while I've had those books for what feels like forever, I haven't gotten around to reading them yet, meaning The Project is actually my very first read from her! This standalone has a quirky female main character, a grumpy male main character, and a story that's mostly a romantic comedy with a good dose of mystery added into the mix.
Devyn MacGregor is in need of yet another personal assistant. He's exacting and demanding, insistent that whoever works as his assistant be a master at multitasking. When he hired Andi Dawson, he may have been a wee bit desperate. There's no denying that she's tenacious and intelligent--not to mention beautiful--but on her first day on the job, one thing becomes glaringly clear: Andi has no clue how to be anyone's personal assistant, let alone that of the CEO of Carta Hotels. She does, however, have a gift when it comes to numbers--a gift that she felt was the bane of her existence, but it may be the one thing that Devyn needs to keep his job. But at the end of it all, will he get to keep the girl?
I went into this book completely blind, drawn to it simply by who wrote it. Yep, I'm the weirdo who, instead of reading one of the seven ebooks I already had from R.L. Mathewson, I decided my introduction to her writing would be through her new standalone. Do I have regrets? Not a single one! I enjoyed Andi and Devyn's story, and I appreciated the additional element of mystery as to who was trying to sabotage everything Devyn had been working on. There was a bit of repetitiveness as far as the writing itself was concerned, and I'm not a huge fan of the third-person POV, which made the flow of the story not as seamless as I hoped it would be. All that being said, I did like the lighthearted humor and the romance, which is why I'm giving The Project four stars.
Release Date: 20 May 2022
Date Read: 15 May 2022
Learn more about R.L. Mathewson.
Purchase The Project on Amazon | Apple Books | B&N | Kobo.