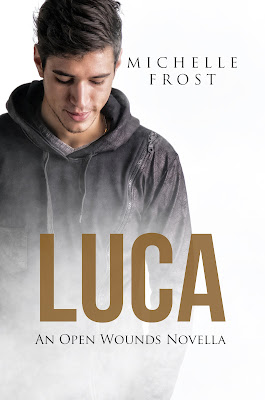 Luca
(Open Wounds #5)
by Michelle Frost
Release Date:  May 27, 2022
About Luca
Life hasn’t always been kind to Luca Barlos. His second chance came in the form of Rourke MMA and a brother who refused to give up on him. Now, he has a job he enjoys, friends, and a crush he can’t ignore. Luca may be shy, but he knows what he wants—the gorgeous detective with chestnut hair and a kind smile.
Clark hasn’t always been a tough-guy detective. In school, he was the nerdy, chubby kid. Now he’s all grown up, living his dream of being a cop and working up the nerve to ask the object of his affections on a date.
Luca is the first novella in the continuation of the Open Wounds series. The series is best read in order. 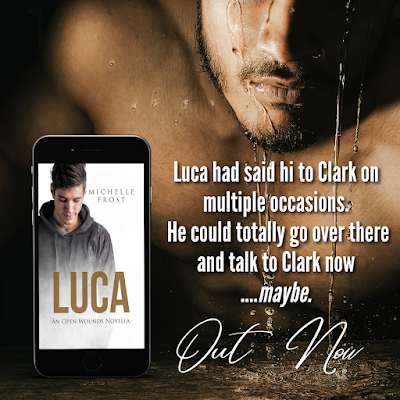 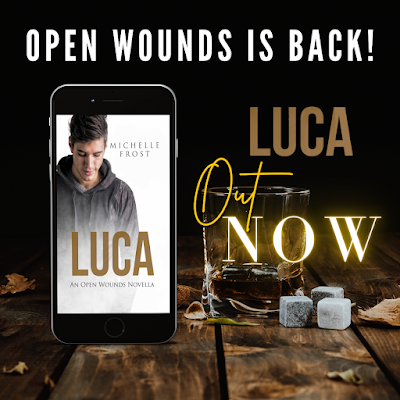 An Excerpt from Luca
The tire settled on the ground on its side as Clark stood up and arched his back, stretching the warm and well-used muscles there. He had only half a set to go before he was finished with the tire and would be moving back inside to finish up with some cardio.
Taking a quick glance at the building, he let my eyes land on Luca’s door. He’d never admit it, but when Dagen had added in the outdoor Strong Man training to their routine, he’d been thrilled. Not that it was a certainty he’d catch a glimpse of the gorgeous, shy object of his ridiculous crush, but at the possibility of it. And Clark had. Several times. He’d even gotten a few hellos, and every one made trying to keep his distance a little harder. But he knew what Luca had been through and he could be patient. Even if being patient meant limiting how often he went to Viridian while Luca was working because it always made him feel like such a creeper.
Luca never said more than a few words when he appeared, as he usually focused on Dagen, but Clark looked forward to every single one. When Clark went to the bar, Luca always made a point to say hi to Clark but never much more. Even with his best effort, Clark was sure his eyes strayed to Luca more often than was polite.
Yeah...He was probably a creeper. Or having some sort of relapse into his teenage psyche. He just...genuinely wanted to get to know Luca. Clark knew he’d had a hard road, being taken by the Crossman MC and made to do things against his will just to survive. Clark would never push him, but he hoped they could cultivate a friendship and someday, maybe more. 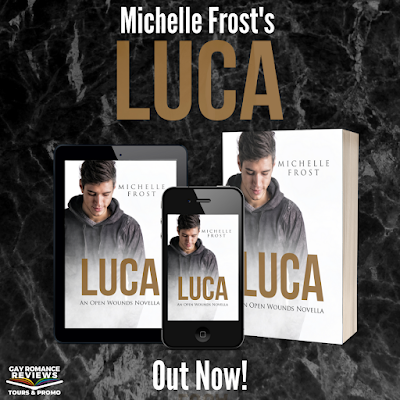 About Open Wounds: The Box Set 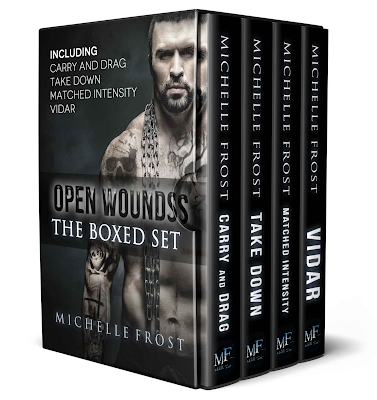 Family. Loyalty. Love.
Follow the Rourke brothers as they fight through injuries, fear, doubt, past mistakes, and current obstacles on their way to love. Each book in the Open Wounds series features one brother’s journey to their personal HEA set among their family owned tattoo shop and MMA fight gym.
This boxset contains:
Carry and Drag
Take Down
Matched Intensity
Vidar
And the Dagen and Ollie bonus short, Recovery 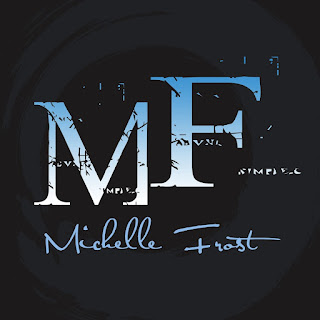 Stories have always been Michelle Frost's escape. Even as a kid, she can remember writing stories featuring her favorite cartoon characters. Now, her characters are a little more grown up, as are the stories she likes to tell. A self-proclaimed coffee addict and a bit of an introvert, she can most likely be found with her nose in a book.
Connect with Michelle
Website | Facebook | Facebook Group | Goodreads | BookBub | Amazon 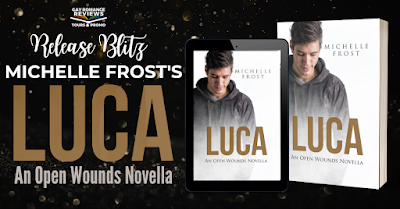