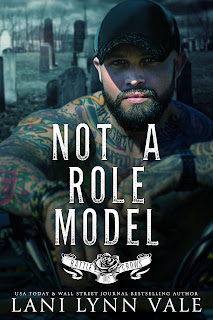 Note: An advance reader copy (ARC) was provided by the author via Uplifting Author Services.
Not a Role Model is book number four in Lani Lynn Vale's Battle Crows MC. This time around, we've got Coreline King and Tide "Rook" Crow, and boy, oh boy, do these two remind me of a dog and a cat going at it. Feel free to interpret "going at it" whichever way you want. *snicker* There isn't a whole lot of love lost between the two, and their issues date back to when they were kids at that! Years later, they still bicker like kids and aren't one bit embarrassed about who knows it. They each give as good as they take and have no problem pushing the other's buttons. But then Coreline is physically assaulted and threatened at her place of work, and as much as Tide enjoys riling her up, seeing her bloodied and bruised has him in protector mode. Things begin to shift between them, but is this a case of frenemies with benefits or could it possibly be more?
For two people so close to being thirty, Elvis and her Roll Tide, erm, I mean Coreline and her Tide acted like preschoolers fighting over everything and nothing. I never quite understood why they became rivals and then frenemies, although more enemies than friends. And then there was them becoming lovers. Now, the blurb may make this book sound like there's a surprise pregnancy that's the major theme of the story, but nope, that isn't the case with these two. Theirs is more of seeing how that line between love and hate truly is a mere sliver and that sometimes, the whole hate thing is masking something else entirely. I enjoyed this romance between the welder and the surgeon, aka Coreline and Tide, and so Not a Role Model gets four stars.
-------------------------
Read my reviews for the Battle Crows MC series: