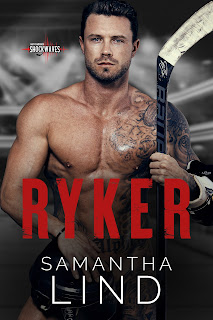 Note: An advance reader copy (ARC) was provided by the author via Wildfire Marketing Solutions.
Ryker is the first book in Samantha Lind's new San Francisco Shockwaves hockey romance series. The series features the new expansion team in the professional hockey league, and Ryker Jorgensen is the first player to be spotlighted. Getting traded may not be what many athletes wish for, but in the case of Ryker, the move from the Indianapolis Eagles to the San Francisco Shockwaves was a welcome one. Being in California meant being closer to his fifteen-year-old daughter, Ellie, and at thirty-five, retiring in the same state as his only child was the dream. When he moves into his new condo, he meets his new neighbors, Avery Reid and her dog, Max. Twenty-something Avery quickly becomes the person Ryker can count on most when he needs someone to spend time with Ellie during his many away games. One thing he didn't count on, though, was falling for Avery.
While I make no secret of my love of angst, I don't necessarily require it in every single book I read. With this San Francisco Shockwaves series starter, there is zero angst, and that's all well and good, yet there is also a lack of conflict, making for a sweet but somewhat tepid read. Ryker and Avery had a connection, but it felt like it was stop-and-go for the first half of the book. There's even a point in the story where Ryker invites Avery out to dinner as a way to thank her for helping him out with a leak in his condo and we hear nothing more about it until three chapters later. What I did love most, however, was Avery's relationship with Ellie, which felt organic. As for Avery and Ryker's relationship, it did have the romance and sex. and the hockey aspect was interesting, with some of Ryker's teammates primed for their own HEAs. All in all, Ryker was a three-starred read.
Release Date: 19 May 2022
Date Read: 15 May 2022
Learn more about Samantha Lind.
Pre-order Ryker on Amazon | Apple Books | B&N | Kobo.