Book Spotlight: An Affair at Stonecliffe by Candace Camp 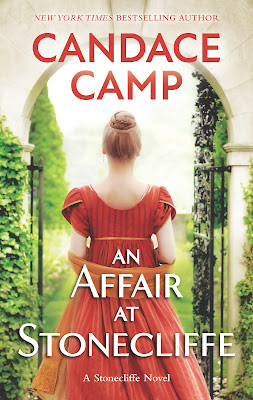 An Affair at Stonecliffe
(Stonecliffe #1)
by Candace Camp
Release Date: May 24, 2022
HQN Books
About An Affair at Stonecliffe
In this delightful new Regency romance from New York Times bestseller Candace Camp, a feisty commoner and a ruthless aristocrat spar in all the right ways.
Noelle Rutherford would do anything for her young son, Gil. A fiercely independent woman recently widowed, Noelle is determined to raise Gil alone. After all, her late husband Adam Rutherford married her for love, which infuriated his aristocratic family. Gil is Noelle’s whole world, and she will not have him wrested from her by haughty nobles.
But she may not have a choice unless she’s prepared to run.
One awful night, Noelle is confronted by Carlisle Thorne, a handsome yet severe, irascible man sent by the Rutherfords. Noelle is horrified when Carlisle offers her money in exchange for taking Gil to be raised at the Rutherford estate, Stonecliffe. Knowing that Carlisle will use any means necessary to take her son from her, Noelle flees, Gil at her side.
Thus begins an epic rivalry that spans five years—a battle of wits between two unforgettable characters bound together by fate and fortune. However, when danger threatens, these enemies must come together to protect what matters most… even if it means losing their hearts.

Candace Camp is a New York Times bestselling author of over sixty novels of contemporary and historical romance. She grew up in Texas in a newspaper family, which explains her love of writing, but she earned a law degree and practiced law before making the decision to write full-time. She has received several writing awards, including the RT Book Reviews Lifetime Achievement Award for Western Romances.
Connect with Candace
Website | Facebook | Twitter | Instagram | Goodreads