Review: Wild About You by Rebecca Jenshak (Wildcat Hockey #2) 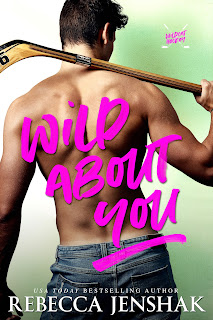 Note: An advance reader copy (ARC) was provided by the author via Valentine PR.
We're back in Rebecca Jenshak's professional hockey romance world with the second novel in her Wildcat Hockey series. Wild About You is a second-chance romance and features the Wildcats's twenty-two-year-old rookie, Tyler Sharp, and his first (and only) love, Piper Vaughn, also twenty-two and a teacher. Tyler's living the dream, but he gets an unexpected rude awakening of sorts when his seventeen-year-old sister, Everly, shows up at his apartment. Two months later, Ev's still with him, and while she may now be eighteen, he insists that she stay focused on her senior year in high school and not get into trouble. So, when he receives a call asking him to come to her new school because of an incident, Tyler isn't quite sure what he's walking into, but what he truly wasn't prepared for was to come face to face with his sister's new teacher--Piper, the girl he had a long distance relationship with when they were eighteen...and whose heart Tyler broke.
One of the things I require most when it comes to second-chance romances is the grovel. I don't need for it to be on-your-knees type of begging, but I do want to see whoever did the breaking up to have some semblance of regret and maybe some remorse, although the latter isn't all that common, especially when it comes to self-sacrifice or I-did-it-because-you-deserve-better scenarios. And Tyler delivered on the groveling, but I also appreciated the fact that Piper didn't immediately jump back into his arms. I understood why Tyler did what he did when they were teens, but I also empathized with why Piper was wary and cautious when he was trying to win her back. The story angle regarding Everly was also a moving one. I liked seeing the siblings trying to find some middle ground and how Tyler's teammates were there for both him AND Ev. I do wonder, though, if Ev will be getting her HEA in the future because I was getting vibes from one Wildcat but then a whole different Wildcat gave me pause. But I digress! I'm giving Wild About You 4.5 stars.
Release Date: 17 May 2022
Date Read: 14 May 2022
Learn more about Rebecca Jenshak.
Pre-order Wild About You on Amazon | Apple Books | B&N | Kobo.