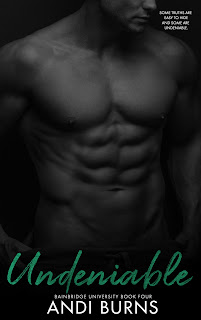 Note: An advance reader copy (ARC) was provided by the author via Grey's Promotions.
Undeniable is the fourth and final novel in the Bainbridge University series penned by Andi Burns. The end of a series that I've fallen in love with always leaves me with bittersweet feels, and that was exactly the case with Booker Zabek and Ian McBride's story. Booker is a twenty-year-old junior at Bainbridge University and a college hockey player; Ian is a twenty-five-year-old and a teaching assistant in Booker's Psychology of Human Sexuality class. With his three best friends all finding love with the women in their lives, Booker is the odd man out. It's not like he doesn't want what they have, but for him to lay claim to it, he'll have to be honest with himself and with those around him, and if it's one thing his domineering father has impressed upon him time and again, it's that Booker lives by his father's rules and demands. So crushing on Ian? That's a definite no-go. But for how long can Booker continue denying the most authentic version of himself?
I think Booker and Ian's story was a great way to end what's been an addictive series. I'm not entirely sure if this is the author's first foray into the gay romance sub-genre. I've read most of her books, with the exception of a Chesapeake Shores holiday novella, Merry Trickmas, and Delayed, her short story in the multi-author Let's Play sports romance anthology, but I don't want to assume if this final Bainbridge University book is her first M/M romance. Either way, this was a good read, one that I enjoyed from start to finish. It's a fairly lighthearted story, although there are some definite angsty moments, especially when it comes to Booker's issues with his father and Ian's instinct to put everyone's welfare ahead of his own. One of my favorite things, naturally, was the friendship that Ty, Knox, Whit, and Booker had, creating their own found family through the years. I'm sad that the Bainbridge University series is coming to an end, but Undeniable gave it a 4.5-starred end, and I'm looking forward to a return to this campus with Bainbridge Hockey!
Release Date: 25 May 2022
Date Read: 20 May 2022
Learn more about Andi Burns.
Purchase Undeniable on Amazon.