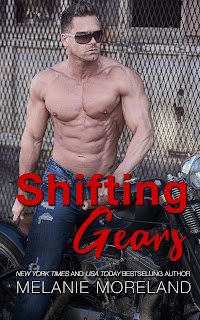 Note: An advance reader copy (ARC) was provided by the author.
Ah, these men of Reynolds & Co. Restoration certainly know how to rev my engine. (See what I did there?) It's three for three as Melanie Moreland releases the third novel in her Reynolds Restorations series. Maxx Reynolds and Stefano Borelli have found their respective happily-ever-afters, and now, it's Brett Conner's turn. If you've read the other books in the series, you'll recall that car mechanic and business partner Brett has been hooking up with Charly Reynolds' best friend, photographer Kelly Ryerson. He was always hoping she would decide to actually be in a relationship with him, but her most recent decision to up and leave for an assignment without letting him know beforehand told Brett that maybe it was time to let her--and his pipe dream of forever with her--go. Months later, though, she's  back, and even as he tries to avoid her and keep his bruised heart safe, Brett has noticed that there's something different about Kelly. He tells himself to stay professional and try to just be her friend, but as she opens herself up more, Brett's bound to shift gears again.
Diving into this book, I knew that it was going to take a lot for me to warm up to Kelly. She had Brett's heart in her hands and she crushed it bit by bit each time she left him behind. Yeah, yeah, she was clear about not wanting anything more than physical with him, but still. But with the heartrending back story that Melanie Moreland gave her, I finally had a better understanding of why she was the way she was. Add to that the circumstances that had her finding solace in Littleburn with her best friend and with the guy she was afraid would want nothing to do with her after the way she treated him the last time they saw each other. I adored how Brett tried to protect himself but couldn't hid that protective and nurturing side that had. There was also the way he put in the effort to mend fences with his father. I was THIS close to giving this book five-plus stars, but I hesitated due to how the whole Carl, aka the photographer Kelly had been assisting and deemed a mentor, situation went about. Still, Shifting Gears is a solid five-star read, and I can't wait for Chase's story!
-------------------------
Read my reviews for the Reynolds Restoration series: