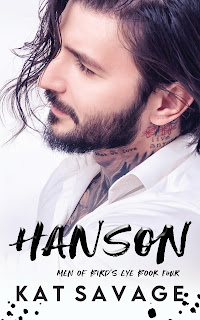 Note: An advance reader copy (ARC) was provided by the author via Wildfire Marketing Solutions.
Hanson is the fourth and final book in the Men of Bird's Eye series from Kat Savage. The titular character is Hanson Serrano, who at twenty-five, is the youngest tattoo artist in the Bird's Eye Tattoo Studio. He shares his story with Thea James, who is a thirty-three-year-old sixth grade teacher and single mother to eleven-year-old Ethan. When an emergency leaves Hanson to pick up his "niece", Ava, from school, he meets her math teacher, Miss James. He's immediately drawn to her, but when he asks her out, she shoots him down, letting him know that she's got a date set up with a guy who's the complete opposite of Hanson. After all, Thea knows all too well what it's like to fall for the bad boy. Add to that the fact that her student's tattooed hottie of an "uncle" is eight years younger than Thea. But Hanson is prepared to bide his time because he believes Thea will be worth the wait.
I love me a well-written reverse age gap romance, plus the fact that I loved the third book, Avery, had me eager to get my hands on Hanson. Let me begin with what I loved most: Ava and Ethan! Yep, I adored these two eleven-year-olds, who were wise beyond their years and proved that kids are far more observant than they're given credit for. They totally stole my heart. That isn't to say that the actual main characters, Thea and Hanson, weren't likable. They were, and they definitely had the sort of chemistry and connection that I require from couples in my romance reads. There were moments, though, where it felt abrupt, and there were a couple of times where the writing was repetitive. Still, I appreciated how this was mostly a lighthearted read with a pinch of angst and how it wrapped everything in the series quite nicely. Hanson receives 3.5 stars.
Date Read: 25 May 2022
Learn more about Kat Savage.
Purchase Hanson on Amazon | Apple Books | B&N | Kobo.