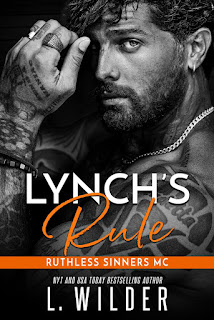 Note: An advance reader copy (ARC) was provided by the author via Enticing Journey Book Promotions.
When Viper's Demands was released a few months ago, I wondered if it would be the end of the Ruthless Sinners MC series. After all, Viper was the president of this motorcycle club, and his story was the one most anticipated by a lot of readers of the series. But lo and behold, L. Wilder recently released the ninth book in the series, and I'm a happy camper! Lynch's Rule is the story of Lynch, aka Conor, and Raelyn. While working a shift at the Ruthless Sinners' strip club, Stilettos, Lynch and his brothers are caught unaware when an explosion rips through the place. When the authorities arrive, Lynch's attention is snagged by one of two young women sitting in the backseat of one of the police cruisers. Raelyn was someone who seemed eager to throw caution to the wind, and maybe that's why she found the big, bad biker so enticing. Lynch only had one rule, but with Rae proving how much of a rule breaker she is, could she end up breaking his heart?
Lynch/Conor and Raelyn definitely had one of the more memorable meet-cutes I've come across in any of L. Wilder's books. I liked that there was that stumble after they both noticed each other because it made things more interesting going forward. Naturally, nothing comes easily when it comes to these Ruthless Sinners. There's some suspense courtesy of certain terrible things that happened to the club and those who were under their care. The lone person I had on my suspect list turned out to be the right one, and while I kinda-sorta-maybe understood their motivations, the manner in which everything happened was just horrible. But worry not because there is a happily-ever-after here, one that left me feeling happy and satisfied, which is why I'm awarding Lynch's Rule 4.5 stars.
-------------------------
Read my reviews for the Ruthless Sinners MC series: