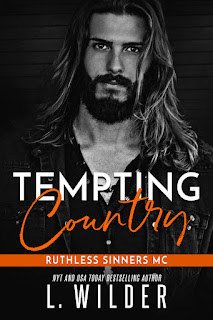 Note: An advance reader copy (ARC) was provided by the author via Enticing Journey Book Promotions.
Tempting Country is the sixth book in the Ruthless Sinners MC series, and this time around readers see Grayson, aka Country, get his happily-ever-after. When the beautiful young woman approached him at the bar they were both at, he agreed to her insistence that no names or any other personal information be exchanged. The next time they see each other, Country finally has a name--Kiersten--to go with the woman. However, he's in for a shock when he learns a bit more. Not only is she Billy the Butcher's daughter, but she has a business proposition for the club. The Sinners would be foolish to say no to going into business with the highly intelligent and determined Kiersten, but complications abound. There's her being their cleaner's only child; and let's not forget the attraction that exists between her and Country. However, things are about to get more chaotic for all of them...
My favorite thing about Kiersten and Country's story had to be how original it was. I also appreciated that Kiersen was as driven as she was. Yes, her original motivation for creating her unlikely business had to do with her father and the secret he had kept from her after her mother passed away, but there's no denying that once she set her mind on it, she was all in. As for Country, I liked how he balanced his loyalty to his brothers and his growing feelings for the woman who was changing his world. Aside from the romance, there's some suspense as well as bites of humor and angst. L. Wilder's MC romances rarely disappoint, and Tempting Country was certainly a worthy addition to her Ruthless Sinners MC series. I'm giving this four stars, and I look forward to reading Jagger's story.
-------------------------
Read my reviews for the Ruthless Sinners MC series: