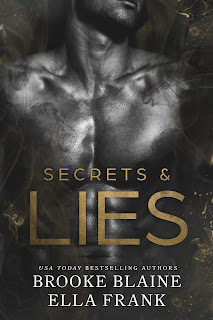 Note: An advance reader copy (ARC) was provided by the authors.
The air outside may be nippy, but Brooke Blaine and Ella Frank's newest standalone M/M romance is bound to get fans and readers hot and bothered. Secrets & Lies is a forbidden romance between a thirty-six-year-old art teacher and his eighteen-year-old student. When Ash Delaney and Ryder Ellis first meet, the attraction isn't just mutual, it's momentous. The next time they see each other leaves them both stupefied. A line is drawn, one that Ash is determined not to cross, but Ryder proves to be an irresistible temptation. Ash knows better than to act on his feelings, but lust--and something that feels like...more--doesn't play by any rules, and maybe Ryder is worth breaking every single one of them. The question is: What could it cost them?
If you're a reader who's sensitive about age gaps and relationships that may be looked upon with disapproval by many, then here's your heads-up because those two things are very much a part of Ash and Ryder's story. That being said, theirs isn't a tale that's only focused on sex and the physical, which is what I love most about this book. Yes, there are deliciously dirty and passionate moments between the main characters, but their relationship isn't "just" about that. This was a romance, with heart and heat striking that wonderful balance alongside a pinch of angst and loads of wit.
I wouldn't be surprised if there were readers who thought that Ash was older and should have stood his ground and that Ryder shouldn't have pushed. Here's the thing, though: love and lust are powerful forces and trying to tame either one, especially when it's as true and encompassing as Ash and Ryder's, would have been foolhardy. If I had to nitpick, I would've liked actual on-page interactions between Ryder and his dad, and maybe that would've given a deeper dive into who Ryder was away from Ash, just like we got to see glimpses of Ash with his son, Sam, as well as an artist and teacher. Even so, Secrets & Lies is still a wickedly awesome 4.5-starred read.
Release Date: 29 November 2021
Date Read: 26 November 2021
Learn more about Brooke Blaine and Ella Frank.
Purchase Secrets & Lies on Amazon.