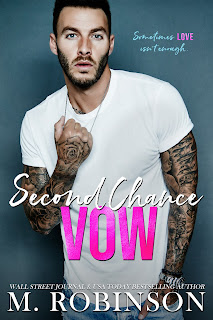 Note: An advance reader copy (ARC) was provided by the author via Wildfire Marketing Solutions.
I had no idea that Second Chance Vow is actually the second novel in M. Robinson's unnamed interconnected series going into it. That being said, it does read well enough as a standalone, although the couple from the first book, Second Chance Contract, certainly piqued my curiosity and interest, so I may read that prior to reading the upcoming third one, Second Chance Scandal, if time permits. This book also marks my very first read from this author. Yep, you read that right. I've read Robinson's co-written work with Rachel Van Dyken, Mafia Casanova and Falling for the Villain, but this new novel of hers is my introduction her writing as a solo author. Exciting times!
Second Chance Vow is the story of a married couple, Christian and Kinley Troy. They were only fifteen when they'd first fallen in love, and through the years, they would go their separate ways, only to find their way back to each other. At twenty-four, Christian asked her to marry him, and Kinley said yes. Now, they've been married for a decade, and while there's no denying that they still love each other, the cracks that have formed have become chasms. Kinley shocks her husband by insisting that she's done and all she wants is a divorce. They exchanged vows, but can things ever get better again when they feel far worse than either of them could have ever anticipated before?
I always find romances with established and committed couples interesting because the dynamic is a tad different compared to couples that have just met or are shifting from one kind of relationship to another. Christian was undoubtedly devoted to Kinley. He loved her beyond measure. Yes, there were moments where you could see the frustration and disappointment he felt, but at the end of the day, he refused to give up on her and what they had. Now, Kinley had her reasons for wanting the divorce, and I empathized with her, but I confess that it took a while for me to warm up to her. Overall, Second Chance Vow was a really moving and entertaining four-starred read.
Release Date: 16 November 2021
Date Read: 15 November 2021
Learn more about M. Robinson.
Pre-order Second Chance Vow on Amazon.