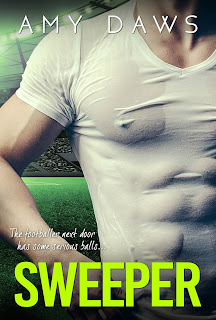 Note: An advance reader copy (ARC) was provided by the author.
I have been waiting forever for this book ever since that ending in Replay! Okay, I'm exaggerating just a teeny, tiny bit with the whole forever thing since it's more like close to seven months, but that's what happens when you eagerly await the release of a book on your most anticipated list. Just a quick heads-up: If this is your first Amy Daws read or you've yet to step your proverbial foot into the Harris Brothers book universe (huwaaat?!), this review may contain details that may prove to be spoilery, so consider yourself warned. If you're like me and are not all that averse to spoilers or are already familiar with all things Harris Brothers, then feel free to do continue reading this review!
Sweeper is the newest spin-off novel in the Harris Brothers book world, and it finds twenty-five-year-old American footballer Zander Williams being offered to play with Bethnal Green Football Club. Many would jump at the chance to play in the Premier League, but Zander can't help but hesitate. After all, signing on would mean leaving his mother behind, and with the loss of his father just a year prior, the move to London weighs on him. His new neighbor could be a bright spot, but the first few impressions he gives twenty-six-year-old Daphney Clarke aren't all that stellar. She thinks he's too big for his britches, but all it takes is one kiss to change things. Daphney knows Zander's in London to be Bethnal Green FC's sweeper, but he seems to be sweeping her off her feet, all the while sweeping one particular under the rug...until the shocking truth is revealed.
I had a feeling this book was going to hit me in the feels. I don't want to give the story away, so I'm trying to keep this review as spoiler-free as possible. Zander was in a difficult position, and maybe he could have handled things better, but my heart went out to him. I wouldn't know how to handle discovering what he did and in the midst of the loss of his beloved father at that. Zander and Daphney were quite a pair, and I think that she was exactly what he needed, and vice-versa. The role the Harris family plays in both their lives, especially in Zander's, was most certainly impactful, particularly, Booker (who was his teammate) and Vaughn (who was his team manager). Sweeper lived up to my lofty expectations and receives five stars. Dare I hope for more from this book universe?
Date Read: 03 November 2021
Learn more about Amy Daws.
Purchase Sweeper on Amazon.