Review: Change with Me by Kristen Proby (With Me in Seattle #17.5) 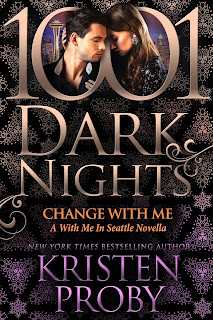 Note: An advance reader copy (ARC) was provided by 1001 Dark Nights Press via Social Butterfly PR.
We're back in Seattle with the latest novella in the With Me in Seattle series from bestselling author Kristen Proby and published by 1001 Dark Nights Press. Change with Me finds thirty-year-old superstar actor Zane Cooper heading to Seattle to be close to his best friend while riding out a scandal that could very well derail his acting career. Renting a new and fully furnished condo for the next six months makes sense; what doesn't make sense, however, is agreeing to share the space with a woman who says she's a new renter as well. Something about twentysomething Aubrey Stansfield not only piques Zane's interest, but also makes him want to explore the connection between them. How can he convince this fascinating girl who sees herself as ordinary that she's the most extraordinary thing that someone like him--anyone--could ever hope to love?
Ooh, I do believe this is now one of my top favorite novellas in Kristen Proby's With Me in Seattle series! I adored Zane and Aubrey. Their relationship from sudden roommates to unlikely friends and then lovers was a serendipitously wonderful mix of sweetness, sass, and sexiness. They were both non-Seattle natives yet it was in this city where Proby has given readers many a happily-ever-after that they would find theirs as well. There isn't a whole lot of drama and the conflict they had to face was one that was quickly resolved. We do get cameos from other characters in the With Me in Seattle series, but for all intents and purposes, this was Zane and Aubrey's story, one that you can read totally as a standalone. Change with Me easily snags 4.5 stars.
Release Date: 30 November 2021
Date Read: 27 November 2021
Learn more about Kristen Proby.
Purchase Change with Me on Amazon.