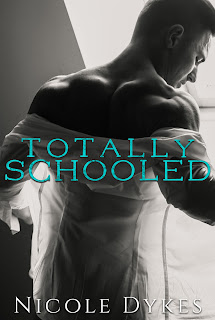 Note: An advance reader copy (ARC) was provided by the author via Wildfire Marketing Solutions.
Nicole Dykes offers up a new M/M romance in Totally Schooled, which is a teacher-parent romance. This is a standalone, with potential for at least one companion novel. Readers are introduced to Rafe Scott, a twenty-four-year-old father to a five-year-old daughter named Hailey. Other than his Aunt Jo, Rafe is wary to ask for help from anyone else, especially when it comes to his only child. His time is mostly spent working construction and spending time with Hailey, so seeing his little girl starting kindergarten is a tad bittersweet. And then he meets her teacher, and Nolan Burke is nothing like he was expecting. For one thing, he's a guy--and a hot one at that. Maybe they could be friends; he certainly can't offer anyone anything more than that. But Rafe can't help himself, and when he and Nolan cross a line, how long will it take before everything comes to a head?
My first read from Nicole Dykes came by way of Immoral a few months back, and I quite adored that book, and my next Dykes-penned was another great story. So admittedly, expectations were high going into this third novel, and the single parent trope is a personal favorite of mine. I liked seeing Rafe and Nolan plus Hailey come together as a family unit, and I enjoyed their story as a whole. Were Rafe and Nolan perfect people? Of course not, but these two needed to work on communicating and being honest, not just with each other but with themselves as well. There were also moments where it felt like something had been skipped over, like a transition that would have made the progress come off more smoothly, i.e. Hailey's sometime-baby sitter being invited to a party with her bestie at Nolan's parents' place, the resolution of Rafe and Nolan's relationship issues, or Jacob (you'll have to read the book because I don't want to spoil it for anyone who has yet to pick this title up!). Still, I was quite invested, so Totally Schooled receives four stars.
Release Date: 15 November 2021
Date Read: 14 November 2021
Learn more about Nicole Dykes.
Purchase Totally Schooled on Amazon.