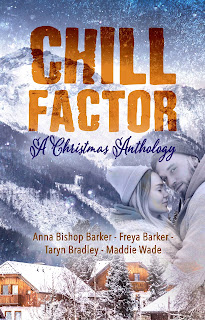 Note: An advance reader copy (ARC) was provided by the authors via Buoni Amici Press.
Chill Factor is a holiday anthology featuring short stories from four authors--Anna Bishop Barker, Freya Barker, Taryn Bradley, and Maddie Wade. The stories share one main setting, the St. James Inn, a popular ski resort set in the picturesque mountains of Aspen, Colorado. Among the four aforementioned authors, I'm only familiar with Freya Barker, whose writing I'm quite obsessed with. I confess that she was the main reason I was drawn to this anthology, but I'm also glad to have had the opportunity to come across three new-to-me authors. As a whole, I'm giving the anthology four stars out of five stars.
Cabin Fever by Anna Bishop Barker starts things off impressively well, thanks to a great story about Lucy Emerson and Dax Parrish, she being a waitress and he being a bartender, both employees of the St. James Inn. But there's more to these two than meets the eye, and it all comes to a head when Lucy's past comes a-calling. Barker did well balancing romance and suspense, and it didn't feel as if I was missing anything. 4.5 stars.
Snowbound by Freya Barker pairs a sassy sous chef named Bobbie Strada with a broody US Marshall named Dag Toland. Avoidance is key for Dag when it comes to the witness he and his fellow Marshalls are trying to protect, but maybe an avalanche and hiding out in a remote cabin could force both their hands. Not sure if it's a Barker thing, but like the one before her, this Barker had my full attention from start to finish. This snags 4.5 stars.
Honeymoon on Ice by Taryn Bradley features an established couple, Riley and Dani Connors, who have been forced to postpone their honeymoon twice already. Maybe some time on the snow-capped mountains in a beautiful chalet will prove to be third time's the charm. Or maybe not. This was rather enjoyable, and Bradley certainly kept her main characters on their toes throughout. All in all, this was an entertaining read. Four stars.
Mistletoe Protector by Maddie Wade is a second-chance romance with a security specialist, Rafe Bianchi, brought in to help find the stalker of a rock star who just happens to be his ex, Nix Kallis. The villain in this story was easy enough to point out. Where I did experience some confusion was the female MC being called Nix and Lina. It isn't till much later that it turns out her name is actually Nicolina. Still, this was a good four-starred tale.
Release Date: 15 November 2021
Date Read: 15 November 2021
Learn more about Anna Bishop Barker, Freya Barker, Taryn Bradley, and Maddie Wade.
Purchase Chill Factor on Amazon | Apple Books | B&N | Kobo.