Review: Next Time I Fall by Scarlett Cole (Excess All Areas #2) 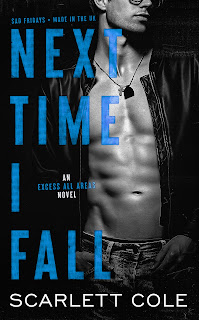 "You want to know what else? I'm certain it's past tense."

"Because I met this girl who's cheaper than therapy, more effective than drugs and alcohol, prettier than any sunset, and has a heart bigger than the lake outside her father's cottage. I've been challenged on my shit my whole life and yet somehow never faced any of it. I think you're good for me, Cerys."

Warmth filled her heart, but her head was still uncertain. "I don't know if you're good for me though."

The minute Jase Palmer's story landed in my greedy hands (by way of my tablet), I pounced on it. After the events in One Day Like This, there was simply no way that the second Excess All Areas novel wasn't going to be on my most anticipated reads list, and Scarlett Cole did not disappoint. Next Time I Fall features a different couple, but I do recommend that you read the books in this series in order because the journey of Sad Fridays as a struggling band to one on the cusp of achieving their dreams plays out throughout. There are also things that happened in the first book that carry over in this second one, so reading in order could help provide a far better experience and appreciation for everything that happens to the characters.
He knows he should be far more excited over the fact that Sad Fridays have been signed to a record label, but the last thing Jason Palmer wants is to be anywhere his older brother is. Jase may be the twenty-seven-year-old lead singer of the band, but he's been feeling more and more like an outsider over the years. Now, he's stuck with the rest of the band in Detroit, having gone across the pond to nail down their first album. When the pressure gets too much for him, he finds an unlikely ally in Cerys Bexter, the twenty-seven-year-old daughter of their record producer and an intern at the recording studio. She radiates positivity and refuses to allow Jase to wallow in his anger. She's about to change his world; he'll readily return the favor.
I know some readers weren't fans of Jase's and how he handled everything between Matt and Iz in the series starter, but there was something about him that called to me and I just knew there was more to him than all that bitterness. I think having Cerys give him a different perspective who he was, the music, and the circumstances was a blessing, as was the fact that she was someone who was objective and didn't just know him as a singular version of himself. I adored these two together, and I appreciated how Cerys was independent and spoke her mind and heart while Jase was finally expressing what he thought and felt without all the resentment and hurt. Giving Next Time I Fall five-plus stars is no hardship, not when it's this good.
Release Date: 16 November 2021
Date Read: 16 November 2021
Learn more about Scarlett Cole.
Purchase Next Time I Fall on Amazon | Apple Books | B&N | Kobo.