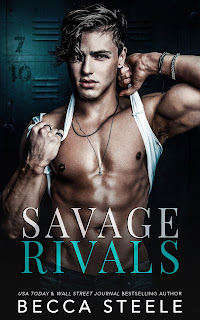 Note: An advance reader copy (ARC) was provided by the author via Wildfire Marketing Solutions.
Where have you been all my life, Becca Steele?! I can't believe it's taken me till now to discover her writing, but after having read and falling in love with her latest release, I plan on checking out her back list as soon as possible. (I may have already borrowed her two other Alstone High books via Kindle Unlimited.) Savage Rivals is the book that's got me all smitten, and for good reason(s). This is part of a series of standalones, and since this was my very first read from Steele, I can say with full confidence that yes, it can and does read quite well without necessarily needing to read anything else.
As you can probably tell from the title, this is an enemies-to-lovers romance, and an M/M one at that, both of which called to me when I was deciding whether to read this or not. Asher Henderson and Levison Woodford are both eighteen and in their final year before they start university. They also happen to share a love for football, but it's that very sport that has them hating each other. Asher's the captain of Highnam Academy's team, while Levi captains Alstone High School's. The rivalry between the schools is beyond fierce, but what's going on between Asher and Levi has shot past being footy foes. It looks like matters are coming to a head, but what happens next leaves them gobsmacked and irrevocably changes everything.
I love it when an enemies-to-lovers romance gives you all that delicious tension between the main characters and where the animosity isn't feigned. Asher and Levi truly did abhor each other, which made the evolution of their relationship so darn fascinating. The bisexual awakening, the team rivalry, the family dynamics, and the friendships were part and parcel of Asher and Levi's story, and everything just meshed together extremely well, at least as far as I was concerned. Becca Steele may have been a new-to-me author going into this, but by the end, she left a wholly positive impression, leaving me eager for more of her fab writing. Five stars go to Savage Rivals.
Date Read: 18 November 2021
Learn more about Becca Steele.
Purchase Savage Rivals on Amazon.