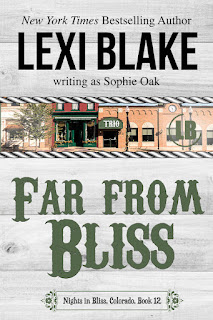 Note: An advance reader copy (ARC) was provided by the author.
Back in Bliss, baby! Lexi Blake, writing as Sophie Oak, takes fans and readers back to that Colorado town in the twelfth book in her Nights in Bliss series. This picks up a couple of years after the events in the previous book, Happily Ever After in Bliss, and finds former US Marshal Michael Novak still struggling to deal with the aftermath of a heartbreaking and soul-destroying betrayal. The one bright spot in the darkness that lingers is Lucy Carson, a waitress at Trio. He's been hesitant to entrust his heart to anyone, but then Lucy's best friend, Tyler Davis, offers up a proposition, one that could make all three of them happy. However, it looks like trouble has returned to their small town of Bliss, and its got Lucy in its sights. If Michael and Ty aren't able to figure out everything that's going on, could the woman who owns their hearts be taken from them?
It's so great to be back in Bliss, and Michael's story is one that I've been hoping and eager for since last year, and Lexi Blake did not disappoint. The fact that Lucy works at Trio seems rather apt considering this book is about her and the guy she's loved forever and the guy who calls to her unlike any other, aka Ty and Michael. These three are standouts on their own, but when they get together, it's almost as if they were meant to be--like it wouldn't have worked out any other way. This is Bliss, of course, so murder and mayhem are staples alongside all the throupling up. Suffice it to say that life in Bliss could never be considered boring, and Blake has excelled in striking up that fantastic balance between romance and mystery. Five stars for Far From Bliss.
-------------------------