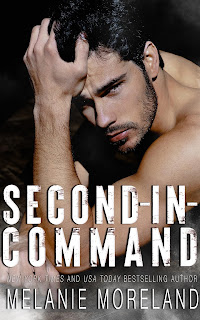 Note: An advance reader copy (ARC) was provided by the author.
After reading the Men of Hidden Justice series starter last month, the next two books in the series quickly landed on my to-be-read list. Can I just say how happy I am that Melanie Moreland didn't let readers wait too long to get this second book in our hands? Second-in-Command is the story of Marcus Gallo, the thirty-four-year-old leader of an elite team that's sworn to rescue and protect victims of human trafficking. When he discovers a caged woman during an operation, something about twenty-four-year-old Melissa Evans calls to his protective nature and triggers emotions that are foreign to him. Marcus is good at what he does because he doesn't have any weakness for others to exploit, but that was before Missy. Will he still be able to keep her safe and find the man who wanted her for his own nefarious reasons if his feelings for her begin to override everything else?
Just like Matteo Campari before him, Marcus Gallo was alpha personified; but unlike Evie Campari, Melissa Evans spoke her mind freely, although both women were forces to be reckoned with. I appreciated that their stories were different, especially given how Marcus first comes across Missy. These two were quite strong-willed and fiercely independent, but I liked how they learned to bend and acquiesce, not because they were forced to, but because they were able to take a step back and see things from the other person's point of view. While the suspense was not at the same level as the romance, it's enough to maintain a thrum of anticipation. I enjoyed the heck out of Second-in-Command, with my only quibble being the overly similar names of Marcus's parents (Gia and Vincent/Vinny) and Matteo's sister and brother-in-law (Gianna and Vince). Five stars.
--------------------------
Read my reviews for the Men of Hidden Justice series: