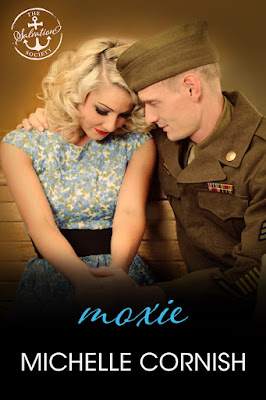 Moxie
(Salvation Society)
by Michelle Cornish
Date Released: November 7, 2021
About Moxie
A WWII love at first sight romance with dual timelines, codebreaking war heroines, and prisoners of war.
People always asked Faye why Will called her Moxie.
It started with a dare at a dance in 1942 that ended in a kiss. Will loved that story.
But there’s more to the story than that. Much more . . .
Gretchen knows this story well. Her grandfather told it over and over while he was alive. But when Gretchen goes home to Jersey to be by her grandmother’s side one last time, Grandma Faye tells a different version of the story.
She knew the moment she saw him, they were meant to be together. Her girlfriends may have dared her to kiss him, but she would have anyway. Then the war got in the way. Faye thought she’d never see Will again. Until that night he took her breath away.
Will may have given Faye the name, but he’s the one with all the moxie. 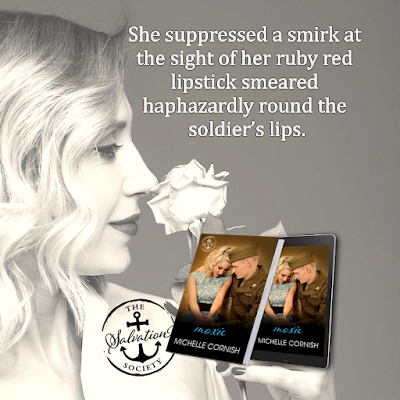 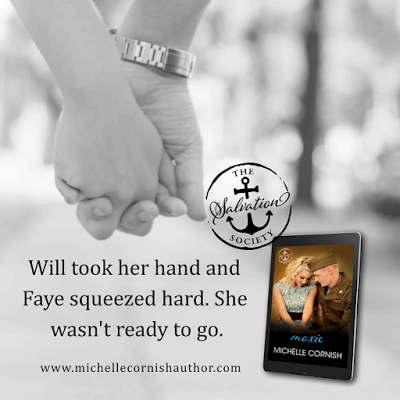 An Excerpt from Moxie
Will took her hand and Faye squeezed hard. She wasn’t ready to go. She didn’t even care about catching the train, but she had to leave before Will did. She was already falling for this man that she’d only known for a matter of hours. She had to stop. She couldn’t open herself up for another heartbreak. Another man wouldn’t leave her. No, she would leave first.
She tried to drop his hand, so she could find Darla on her own, but he wouldn’t let go.
“Look,” said Will. They stopped outside the ballroom, Teddy and Liz short on their heels. “If you think my friends and I are going to say goodbye and let you ladies walk to the train station on your own, you’ve got another thing coming. You’re stuck with us until we can see you off safely.”
Of course she was. She wouldn’t have expected anything else from a group of soldiers, but especially from Will and his friends. The moment she’d laid eyes on him, she knew he was a good man.
Will turned to Teddy. “We’ll check round back. Why don’t you two check out front?”
Liz and Teddy both nodded in agreement.
“Meet back here then we’ll all walk to the train station together.”
Still holding Will’s hand, Faye led him down the street until they came to the back alley. They switched spots, with Will insisting on going first since there were minimal lights at the back of the building, and they had no idea what they might find.
They’d walked several yards when they heard a moan. Faye’s first thought was to ask if the person needed help, but then another moan sounded, this one a little higher pitched. Pleasure, not pain.
Will cleared his throat. “Maybe we should give them some privacy,” he whispered.
But Faye needed to know for sure if it was Darla. “Darla? Is that you?”
Giggling sounded from behind the dumpster. Oh, for heaven’s sake. How romantic.
“Oops. Looks like you found us.” Darla giggled again.
“Are you two all right?” asked Will.
They stumbled out from behind the shadows, Darla straightening the skirt on her dress. “We’re just fine. Why don’t you two give us a few more minutes?”
Faye eyed her friend, trying to determine how much she’d had to drink. Will seemed to be eyeing George who held up his hands. “It was her idea. I swear.”
Will huffed.
“Come on Faye. Don’t be such a stick in the mud,” said Darla.
“You remember what we talked about on the way here, right?” She hinted at their earlier conversation about dancing and babies.
“I sure do. George here is . . .” She cleared her throat. “Prepared.”
“The captain gave us a talking to before we left,” said George.
Will hung his head. “Oh, boy. It’s true. Cap is like a big brother to our crew.”
Faye looked around the back alley. “It’s not exactly the most romantic location, but who am I to judge?” She shrugged then turned in the direction they’d come. Giggles sounded again behind her.
Catching up to her, Will shook his head. “To each their own, I guess.”
They were about to turn back onto the lit street when Faye stopped suddenly. She pulled Will into the shadows close to her and pressed her lips to his. Why should Darla get to have all the fun?
Will deepened the kiss and Faye reached a hand to the back of his neck, holding his mouth tightly to hers. “Mmm.” No matter how close she was to him, it wasn’t close enough. A tingling heat wave spread throughout her body. The way this man kissed was like nothing she’d ever experienced. 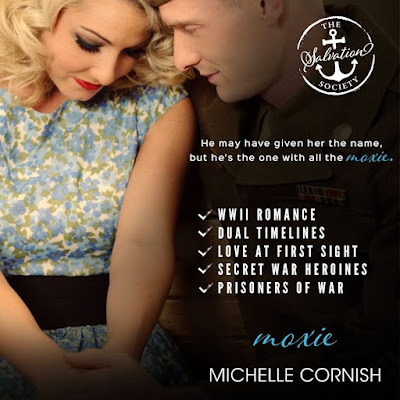 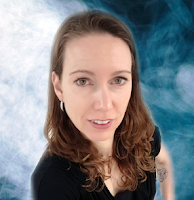 Michelle Cornish is a recovering CPA with a passion for stories. Writing mostly romance and women's fiction with strong female heroines, Michelle's books often include nods to her former life as a CPA.
When Michelle’s not writing, she’s hanging out with her two boys and husband in the beautiful Okanagan Valley, BC, Canada.
Connect with Michelle
Website | Facebook | Twitter | Instagram | Goodreads | BookBub | Amazon