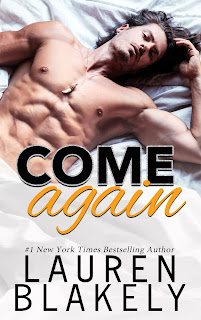 I do not cuddle.

No. It's more like you wrap yourself around me, octopi style.

Ah, to be back in Lauren Blakely's Big Rock book universe is a joy that I am so not taking for granted. It's been over four years since readers were last here, so when Blakely announced that she had a new book in the series coming, the anticipation was boundless. This series is a personal favorite as well, given that Big Rock was my very first read from this author back in 2016, and I've been hooked on her writing ever since. All this being said, Come Again can very much be read independently of the first six Big Rock novels, but certainly wouldn't stop you if you decide to peruse those titles. Consider this my not-so-subtle prod for you to do exactly that!
Come Again is a romantic comedy featuring rivals intent on proving to the public that their way trumps the other's when it comes to romance. There is a free prequel novella, Come and Get It, that focuses on the first meeting between the main characters, Easton Ford and Bellamy Hart, but it also happens to be available as part of this novel. So, if you've read said novella, feel free to skip ahead; if not, you don't need to go searching for the freebie, which was really intended to be available for only a limited time. They were dressed as Jay Gatsby and (not) Daisy Buchanan and there may have been a bet and a kiss involved. That's all you're getting.
Thirty-six-year-old Easton Ford was dubbed the king of online dating thanks to the success of an app he'd created. Now he's earned a reputation for hosting underground events meant for select clients searching for romance. When he finds twenty-nine-year-old Bellamy Hart crashing one of those very fêtes, he's initially thrilled at her presence. That connection they shared during a charity masquerade was one he wanted to explore, but then he discovers that Bellamy is actually his newest nemesis. She's got her own hosting duties, although they're focused on her podcast that's all about romance. The two have very different views when it comes to affairs of the heart, but who'd have thought all that arguing and back forth would lead to the best sex they've ever experienced? It's hot, but can these two be bothered to put their hearts on the line for love?
One of my favorite things about this series has always been it being told from the male main character's perspective. Yes, this is something that Lauren Blakely still does with her books outside of the series, but those are dual points-of-view. Other than the epistolary portions, readers see all the ups and downs on the way to happily-ever-after from Easton's viewpoint. I love the humor and the heat, but seeing Easton's heart and the vulnerability within it is part and parcel of what makes this book--and this series in general since it's something all the heroes throughout have shown--as fantastic as it is. Of course, I tip my hat to Bellamy, who is, hands-down, one of the most kickass heroines EVER from Blakely. From the chemistry between Easton and Bellamy to their hilariously heartwarming story, Come Again was a five-plus-starred must-read.
-------------------------

Read my reviews for the Big Rock series: