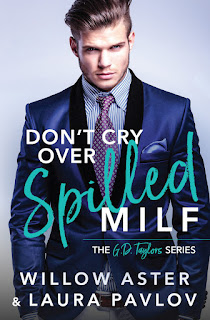 Note: An advance reader copy (ARC) was provided by the authors.
It needs to be said: Gus Taylor is my favorite Taylor sibling! The guy is G.D. extra, and it's his being extra that nudges him ahead of his three brothers (their sister's story is still to come!). Don't Cry Over Spilled MILF is the fourth novel in the G.D. Taylors series, and you can probably guess that it's now sitting prettily atop the first three books penned by the writing duo of Willow Aster and Laura Pavlov. Each book in the series can be read as a standalone, but for optimum reading pleasure, I wouldn't hesitate to encourage new readers to tackle all these romantic comedy books in order.
Twenty-eight-year-old Gus Taylor has watched his three brothers fall in love and enter into committed relationships. He wasn't necessarily in a rush to follow suit until he met his new next-door neighbors. Susannah Brighton is the same age as him, but the author is already a single mom to a five-year-old named Olive. The adorable kindergartener is easily taken with Gus; her mom, though, not so much. Gus may need to call on everything in his arsenal to put on a fail-safe charm offensive, and that may include asking his brothers and the women in their lives for help, as well as a bit of, erm, romance research. He's got huge shoes to fill and showing Susannah he's all in with her and Olive won't be easy; if anyone can do it, it's Gus G.D. Taylor.
Consider me officially smitten with all things Gus, Susannah, and Olive! I couldn't get enough of these three, and I absolutely adored their story. Yes, the romance was awesome because seeing Gus and Susannah go from two individuals who didn't think they were ready for a relationship to becoming friends, then lovers and more was a huge part of why I loved this book, but I also cherished how they were with their respective families. The best thing, though, was how Gus was with Olive and how the three of them were evolving into a family unit. There was loads of humor and a pinch of angst and all the romance, making Don't Cry Over Spilled MILF a five-starred read.
-------------------------
Read my reviews for the G.D. Taylors series: