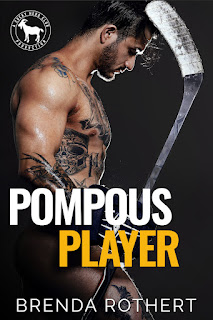 Note: An advance reader copy (ARC) was provided by the publisher via Give Me Books Promotions.
There have been quite a lot of collections that have been released the last couple of years that are inspired by existing book universes created by other authors, and while I've done the whole pick-and-choose process with a few (with only one umbrella book world in which I was able to read every single one of the books released), they've all been book universes that I'm familiar with. Surprisingly enough, Vi Keeland and Penelope Ward's Cocky Hero series is one I haven't had the pleasure of reading. I know, I know; I'm a sad excuse for a romance reader. So, it's rather funny that I've actually already perused some of the books that are part of their multi-author Cocky Hero Club collection! The latest one I've read is Pompous Player, which is penned by an author whose work I've enjoyed in the past, Brenda Rothert. Just like those before it, this novel can be read as a total standalone.
When her best friend passed away, leaving her guardian to her newborn daughter, Winter Stevens didn't even think about refusing the responsibility. Even though it's led to the hairstylist becoming nearly destitute and THIS close to being evicted from her apartment, she couldn't imagine life without baby Avery. She's hoping the birth father will sign away his parental rights, but Harry Stone is no ordinary man. The former star hockey player turned military veteran and now successful businessman wants to DNA confirmation that Avery is his, and if the test proves exactly that, he wants nothing more than to have his daughter with him. Caring for a baby is easier said than done, so Harry offers Winter a place to stay while, for all intents and purposes, co-parenting Avery. Living with someone who hates you is hard; lusting over that same person? Pure torture.
After reading the blurb for this book, reading it was a no-brainer. I have a thing for single-parent romances AND I adore enemies-to-lovers stories. Also, Brenda Rothert's an author I can count on to deliver the sort of story I can become emotionally invested in. The thing is, though, I struggled with this book. Winter and Harry spent three quarters of the book either bickering or doing this whole back-and-forth thing that usually appeals to me, but you know what they say about too much of anything being a not-so-great thing. It was almost as if Winter hated Harry double-fold because Mallory was gone so she was being angry on her behalf. Then there was Harry who honestly seemed eager to take care of Avery, but suddenly seems more eager to hand her off to whoever was ready and available. The last quarter was the saving grace, though, so 3.5 stars for Pompous Player.
Release Date: 14 November 2021
Date Read: 13 November 2021
Learn more about Brenda Rothert.
Purchase Pompous Player on Amazon.