Review: Beyond the Game by Kaylee Ryan (Out of Reach #2) 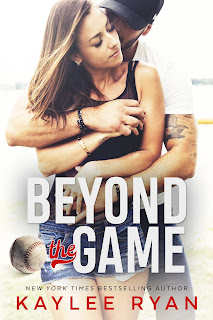 Note: An advance reader copy (ARC) was provided by the author via Give Me Books Promotions.
Beyond the Game is the second book in Kaylee Ryan's Out of Reach baseball romance series. While this does well as a standalone, readers of the series starter will recognize Paisley Monroe, eldest daughter of Easton  (who adopted Paisley when she was four) and Larissa, who was affectionately nicknamed Princess P by her adoptive father. Now twenty-two, Paisley catches a baseball game headlined by her home team, the Tennessee Blaze, and chats up the hot guy sitting beside her. When the two are caught by the stadium's kiss cam, they share one heck of an unforgettable kiss. She decides, however, to let fate take charge and leaves without giving the guy named Cameron her number or any other information. Imagine her shock when she realizes the first baseman called up from the farm team turns out to be none other than Cameron Taylor, twenty-five-year-old baseball player and the guy Paisley locked lips with. Cam makes it clear that he intends to pursue her but will her fantasy job as the Blaze's trainer and his major league dream complicate matters?
This book was sugary sweet yet also hot as heck. There was a definite connection between Paisley and Cameron from the get-go, and I appreciated the fact that the latter was all in when it came to building a relationship with the former. I also liked that Paisley was the one who was a wee bit hesitant, noting that everything seemed to be going at full speed between them, but she also couldn't deny that the chemistry she shared with Cam was extraordinary. Admittedly, the development of their relationship did feel like it was going at a fast clip, but I guess this was a case of "when you know, you know" for Cam. The conflict was one I already saw coming, so in terms of originality, but it was all resolved thanks to a bit of clarification from two wise older men; I won't say who, so you'll have to read Beyond the Game to see how it all plays out. Four stars.
Release Date: 09 November 2021
Date Read: 09 November 2021
Learn more about Kaylee Ryan.
Purchase Beyond the Game on Amazon.