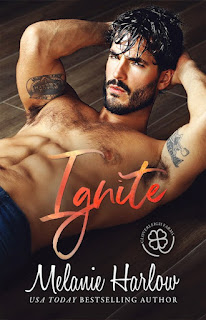 Note: An advance reader copy (ARC) was provided by the author.
Melanie Harlow takes readers back to Traverse City, Michigan with the first in the Cloverleigh Farms books featuring the next generation. From the moment she announced that this series was in the offing, it immediately landed on my list of most anticipated reads. This new collection of books were following in the mighty footsteps of its predecessors, so when I say that my expectations were high, I mean they were astronomical, thank you very much. Though I'm happy to say that Harlow met each and every expectation.
Ignite is a single-parent, grumpy/sunshine, neighbors with benefits romance. Moving into a townhouse was a long time coming and a necessary thing for single father, former Navy SEAL, and firefighter Dexter Matthews. He and his daughters, Hallie and Luna, deserved a place that felt like home, even if the girls only stayed with him two days out of the week. Add that to having a job he liked and there wasn't much more he needed. Dex certainly wasn't looking for a relationship, but he was definitely looking at his new neighbor.
Winifred MacAllister loved being in love, which was a problem considering she seemed to be drawn to men who were duds. Maybe what she needed was a dad instead, like the hot one who now lived next door. Dex was a grump, but his daughters were delightful. Once Winnie and Dex made it clear to each other that they weren't interested in commitment--and he kinda-sorta-maybe got over (cough, ignored, cough) the fact that she was twenty-two and he was thirty-four--things were simple, or rather, simply about sex. But once feelings creep in, everything is bound to be complicated.
Irresistible was the book that launched the original Cloverleigh Farms series, and it was about Mack and Frannie MacAllister's romance and how they became a family with Mack's daughters Millie, Felicity, and Winnie. Yes, THAT Winnie. Now, if you're a regular Melanie Harlow reader, and you've read that series starter and have just finished the new book featuring the next generation, then you may notice certain parallels between them. Single fathers, younger women, and daughters who were wise beyond their years. HOWEVER, these novels stand on their own and are, by no means, recycled.
This book is every bit as sweet and witty as I expected it to be, but there's a VERY healthy dose of steam to it as well as a hint of angst. Dex and Winnie were hot and heavy, but it was those moments of Dex with Hallie and Luna and Winnie with the three that made my heart happiest. Add to that having Mack and Frannie and other familiar characters, albeit all quite a few years older, and Ignite was every bit the five-starred read I had hoped it would be.
Release Date: 22 November 2021
Date Read: 21 November 2021
Learn more about Melanie Harlow.
Pre-order Ignite on Amazon.