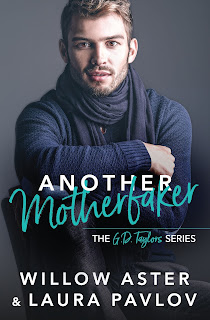 Note: An advanced reader copy (ARC) was provided by the authors.
The G.D. Taylors series continues to be the entertaining, laugh-out-loud romance romp I've come to expect from the writing duo of Willow Aster and Laura Pavlov. We're now on to the third book in the series, and this time around we've got a story that's got the fake relationship trope. Another Motherfaker is about Caden Taylor and Cosette Dubois, and if you were able to read the second book in the series, The Bold & the Bullheaded, you may recall that Cosette was in a long-term relationship then. Welp, she's got herself a new boyfriend--a fake one, but don't let her family and her cheater of an ex-boyfriend that. The new "beau" is none other than Caden, and the fact that this "relationship" surpasses her last one says a lot. And while Caden has never been one for commitment, he would do anything for Cosette. Even suffer through interactions with her mother who looks down on him, her mother's kooky dog with a thing for a stuffed giraffe, and an ex-boyfriend who can't accept they're over. Oh, and the relationship? It's starting to feel real.
Caden has officially become my favorite G.D. Taylor, although I suspect that Gus could give him a run for his money. I adored him--Caden, not Gus...okay, maybe also Gus...fine, all of the G.D. brothers!--and it was clear that he adored and was devoted to Cosette. She was obviously very smitten with him as well. They simply clicked together, both as friends and lovers. Dare I say that Cosette turned out to be even better than I'd hoped she would be, and same goes for Caden. She wasn't some docile twenty-four-year-old who bowed down to the bidding of her overbearing mother, and he wasn't some thirty-year-old who spent all his time adding notches to his bedpost. I loved seeing these two share such a strong connection to one another, but I also found their differing family dynamics interesting. All in all, Another Motherfaker met my expectations, and it receives 4.5 stars.
-------------------------
Read my reviews for the G.D. Taylors series: