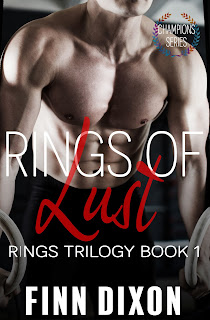 Note: An advanced reader copy (ARC) was provided by the author via Gay Romance Reviews Tours & Promo.
Rings of Lust is the debut novel of Finn Dixon, and it's the first book in Dixon's Rings trilogy, which features the same main characters, Olympic gymnasts Camden Kane and Lucas Rivera. Both are nineteen and attend the same university in Florida. While Luke is openly gay, Cam remains firmly in the closet. The attention that Luke has garnered for being out is just one of the reasons that Cam would rather keep his sexuality under wraps, but it doesn't mean that he doesn't crave being with someone. When he decides to take the off-hand suggestion of one of his teammates to get laid, Cam uses an app in hopes to keep it on the down-low, only his hook-up turns out to be none other than Luke. While Luka may have assumed Cam was straight, it's obvious he was wrong, but the connection they have? Well, that feels oh-so-right. But will this hot hook-up lead to something more?
This was a pretty good start to the series, with an interesting cast of characters led by two main characters who were easily likable. Camden and Lucas were nineteen and had a heck of a lot of pressure on them, what with being part of the men's gymnastics team at the Brisbane Summer Games and all. And of course, there was the whole matter of Cam being in the closet and Luke having the overbearing, disapproving parents that he had. The latter were portrayed as the villain in the romance between Cam and Luke, and I must admit that Mr. and Mrs. Rivera were a conundrum. They were financially supporting their son's gymnastics training, but they didn't seem all that enthusiastic about it either. I'm certainly curious to see how everything plays out in the second book. Although longer than expected, Rings of Lust was a pretty entertaining 3.5-starred read.
Release Date: 16 September 2021
Date Read: 16 September 2021
Learn more about Finn Dixon.
Purchase Rings of Lust on Amazon.