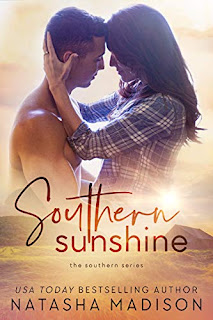 Note: An advanced reader copy (ARC) was provided by the author via Wildfire Marketing Solutions.
I can't believe we've reached the end of the Southern series! From what I thought would be a trilogy, this series has spawned eight stories that spanned two generations, although there are three generations to account for. I've grown attached to the couples and the families they've created together and for themselves. The McIntyres, Barneses, and Huntingtons have grown into this unit that's all about family, love, loyalty, and home, and I'm going to miss this original group, but I know there'll be opportunities to check in on them later on... I digress, although I'm sure we'll be hearing more on that sooner or later.
Southern Sunshine is the eighth and final book in Natasha Madison's Southern series, and this is Reed Barnes and Hazel Bennett's story. They were always just friends, but six years ago, right before Reed was headed for basic training and Hazel was off to start college, they shared one unforgettable night together. He never wanted to follow in the footsteps of the other men in his family; he was never meant to be a cowboy. Being in the military would allow him the freedom to be himself--to try and find his place in this world. When an injury lands him back in his hometown for convalescent leave. But then Hazel returns as well after learning of her beloved grandfather's passing, and she isn't alone. She's only staying two weeks; he's leaving after thirty days. One revelation could change their plans.
I've been itching to read Hazel and Reed's story since it was clear that theirs would be the next one in the series. Admittedly, I wanted to smack Reed upside the head a number of times in the book. I understood his desire to do something that was connected to anything to do with his family's legacy, but I swear, the boy and the man frustrated me at times. But thankfully, he made his amends and he finally--FINALLY!--found his true purpose. Naturally, I'm not going to say what it was, but suffice it to say, that I appreciated the lengths he want to in order to get his proverbial ducks in order and prove himself worthy to Hazel. Southern Sunshine gets 4.5 stars, and I can't wait for the spin-off series to come!
------------------------