Review: Make You Miss Me by B. Celeste 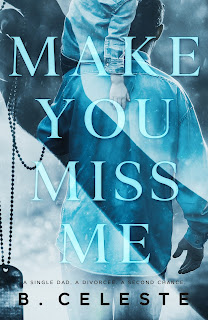 Note: An advanced reader copy (ARC) was provided by the author via Wildfire Marketing Solutions.
B. Celeste definitely made me miss her storytelling with this new angsty standalone, which also served as a reminder that I need to catch up on her other releases that I've yet to read. Make You Miss Me is my sixth read from Celeste, and it certainly gave Underneath the Sycamore Tree a run for its money as my favorite book from this author. Not only does this latest release have one of my go-to tropes, single parent romance, but it's also a story about getting another chance at finding and holding on to the forever kind of love.
When Stevie Foster married Hunter Cross at nineteen, she believed it would be the first day of her happily-ever-after. Twelve years later, thirty-two-year-old Stevie found herself starting over again. Divorced and single for the first time in so long, she decides to move to a new place in a new town and begin working as a teacher. There's something familiar about her new neighbor, though. Fletcher Miller isn't just some average Joe. Not only is he a retired lieutenant colonel from the army, he was Hunter's former commanding officer. The forty-two-year-old also happens to be the very single father of ten-year-old Dominic, a young boy on the autism spectrum. Oh, plus Nicki is one of Stevie's fifth grade students.
This book had lots of angst, but it never felt overly heavy or depressingly dark. B. Celeste did a good job showing readers Stevie's growth as an individual and how she transitions from married and devoted to her husband to single and embracing the newer sides to herself post-divorce. Fletcher was someone who always put his son first, and while he came off as distant and detached, it was clear that he was drawn to Stevie from the get-go. Admittedly, I never liked Hunter, and I was glad that Stevie didn't end up with him because she deserved someone like Fletcher in her life. Make You Miss Me gets 4.5 stars.
Release Date: 02 September 2021
Date Read: 01 September 2021
Learn more about B. Celeste.
Purchase Make You Miss Me on Amazon.