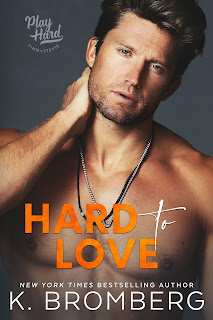 I do love me a redemption story, and K. Bromberg offers that and more with the fifth novel in her Play Hard series. This book is the first one that isn't about the Kincade sisters, what with all four of them finding their own happy endings in the first four stories. If you're familiar with the series, then you may recall one particular side character who broke the heart of the youngest Kincade, Chase (Hard to Lose, book four in Play Hard series). Yup, I'm talking about none other than Finnegan Sanderson, an exceptional sports agent and an absolute non-believer when it comes to love and happily-ever-after.
Hard to Love is Finn Sanderson's story, one that he shares with Stevie Lancaster. He's a thirty-four-year-old sports agent who's known for his tenacity and going above and beyond for his clients. She's a twenty-four-year-old professional tennis player who may be one of the best on the tour, but she's been struggling ever since her beloved father, who was also her coach and manager, passed away. When Finn's mentor, Carson Vega, asks him to step in and take over a client of his, he agrees. After all, the man has been a far more positive influence in his life than his own father had ever been. Finn's handled problematic athletes before, but he never anticipated the additional problem of Stevie Lancaster being the girl he had a memorable one-night stand with just the night before.
I was prepared for Finn to have to work his way into my good graces, what with him doing what he did to Chase in the previous Play Hard book. What I wasn't ready for was getting a big chunk of his back story at the beginning of the book and realizing why his attitude about relationships was the way it was. I think K. Bromberg pairing him up with someone like Stevie was perfect because as strong of a personality she may have had, she also needed some actual tender, loving care, and surprisingly, Finn was the one to offer it. I loved seeing both Finn and Stevie grow and develop as main characters, and their story had both heart and heat and all the best stuff in between. Five-plus stars for Hard to Love.
-------------------------
Read my reviews for the Play Hard series: