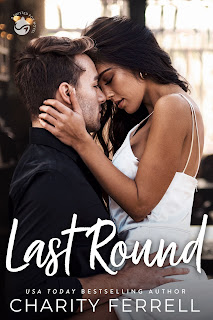 Note: An advanced reader copy (ARC) was provided by the author via Wildfire Marketing Solutions.
Talk about ending a series on a high! Last Round is the fifth and final novel in the Twisted Fox series, and as far as I'm concerned, Charity Ferrell saved the best for last. When Silas Malone first noticed Lola Delgado, he did a bit flirting from behind the bar in hopes of scoring her number--and score it he did! Imagine his surprise when Silas decides to call and the voice on the other line was distinctly...male. It turns out that Lola has a habit of giving out her cheating ex's digits as a means of revenge. Surprisingly, this is the beginning of a beautiful friendship between the two, both agreeing that anything romantic would be a no-go. Everything is just as it should be...until one of them confesses their feelings for the other. They risk losing one of the most important relationship in their lives...or will this be that something more that could actually last if given a chance?
Lola and Silas's story is the one that I've been eager to get my hands on throughout the Twisted Fox series. That's due in large part to the fact that the glimpses I got of them had me curious. Now that I've satisfied said curiosity, I'm officially declaring these two my favorite Twisted Fox couple! They went from being strangers to acquaintances with shared ties who push each other's buttons to fake dating to real best friends; and then the journey from that point to becoming so much more was fraught with complications, no thanks to one of them--cough, Silas, cough--not being all the forthcoming about certain parts of his past. There are lighthearted moments, but there are also angsty ones in the book, but nothing dark or depressing. Having the other Twisted Fox couples and having them living out their happily-ever-afters was the icing on Last Round's five-starred cake.
----------------------------
Read my reviews for the Twisted Fox series: