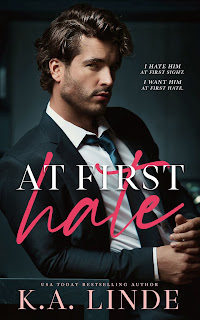 Note: An advanced reader copy (ARC) was provided by the author via Wildfire Marketing Solutions.
When I began reading At First Hate, I had no idea it was part of a series called Coastal Chronicles. It shares the same world as Hold the Forevers, which was released in February. You could try reading this new novel independently of the other, but I'm going to recommend you read the two books in order, especially because there are events that overlap between them as well as recurring characters. I'm also going to suggest you keep your eyes peeled, especially if you so happen to be an avid K.A. Linde reader. Just saying...
At First Hate is an enemies-to-lovers romance, and the hate is oh-so-real between Marley Nelson and Derek Ballentine. They came from two very different worlds, and those differences were always front and center while they were in high school and college. Once they were in the same graduate school, they were supposed to be equals and peers. She never meant to end end up in his bed or for everything else that followed. Now, they're about to face off again; this time, Marley refuses for Derek to get the best of her.
K.A. Linde brought the angst and then some with this some new book of hers. I love reading enemies-to-lovers romances because I want to see all the expected tension simmering between the main characters, and there was definitely that happening with Marley and Derek. There's a lot of hopping back and forth as far as timelines are concerned, which did make for some moments that had me reeling from the whiplash. However, the character development was a standout, so At First Hate receives four stars.
-------------------------
Read my reviews for the Coastal Chronicles series: