Review: Below the Line by April Canavan (Birch Police Department #5) 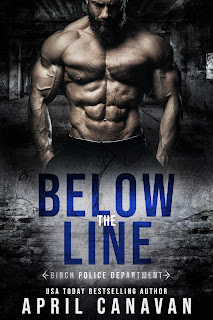 Note: An advanced reader copy (ARC) was provided by the author via Wildfire Marketing Solutions.
Below the Line is the fifth and final novel in April Canavan's Birch Police Department. Funnily enough, I read the series starter, Balls to the Wall, back in February, but never had the opportunity to read books two to four. Basically, I started and finished the series but missed everything in between. Go figure. A lot of it had to do with me being as clueless as ever that those three books had been released. Fingers crossed the series is enrolled in the Kindle Unlimited program so I can play catch up. Till then, I'll be reading the series that came before this, Birch County Blue, while waiting for the release of the first book in the next spin-off in Canavan's Birch book universe, Ground Zero (book one in the Birch Fire Department series). But first, back to my review!
Teri Blake and Logan Pierce were friends who fell in love at sixteen and eighteen, respectively. They grew up together, their families forging their own friendships as well. But all it took was a chain of events for everything between them to come to a heartrending stop. Fourteen years later, Teri makes a decision, one that's necessary if she has any hope of moving forward with whatever fragments are left of her still broken heart. It's a decision that Logan isn't taking lightly--one that spurs him into action, but could it all be a case of too little, too late? Time has taught Teri not to trust Logan's promises, no matter how enticing they sound.
Weird as it may seem, I actually had no issues while reading the book, even though I'd missed all three of the middle novels in the series. Yes, I was curious about the couples I had yet to read about, enough that I have books two to four on my to-be-read list, but I was still able to understand Teri and Logan's story. There were moments where I felt like I missing information, yet whatever it was would be divulged a few chapters later, so I wasn't necessarily left hanging. This was an angsty read, but one that's mostly tempered by the romance and wit, with some lighthearted feels thanks to Teri's and Logan's families and friends. I liked seeing the growth that these two main characters went through, especially considering the trauma that they experienced as teenagers. Below the Line receives 4.5 stars, and look forward to the Ground Zero next month.
Release Date: 28 September 2021
Date Read: 26 September 2021
Learn more about April Canavan.
Purchase Below the Line on Amazon | Apple Books | B&N | Kobo.