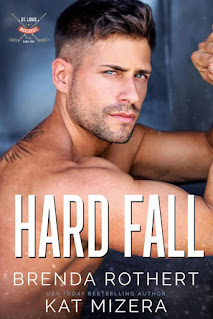 Note: An advanced reader copy (ARC) was provided by the authors via Elle Woods PR.
Brenda Rothert and Kat Mizera have joined writing forces to create a new hockey romance series titled St. Louis Mavericks. Now, I've read books from these two as individual authors, so my curiosity had me eager to see how they would work together. Hard Fall is their series starter, and it's an enemies-to-lovers story that has two people who barely tolerate each other for the sake of their respective best friends who happen to be married to one another finding themselves guardians of two young children when the unthinkable happens. It's got angst, wit, tension, sex, romance, hockey, and kid cuteness!
Hard Fall introduces readers to Weston Kirby and Hadley Ellis. He's a professional hockey player with the St. Louis Mavericks, and she's an associate editor for a lifestyle magazine called Willow and based in New York. When their best friends, Benjamin and Lauren Whitmer are killed in a car accident, Wes and Hadley are shocked to learn that they've been named legal guardians for Ben and Lauren's children, Annalise and Benny. Not only will they need to figure out how to co-parent, but they'll also need to live together under one roof, all while trying to juggle their respective careers. That's easier said than done since they can't stand each other; will it be worse when they start falling for one another?
I seriously enjoyed this first book from the St. Louis Mavericks, and it's clear that Brenda Rothert and Kat Mizera work quite well together. I really liked Wes, who turned out to be so much more than I thought he would be. It took a while for me to warm up to Hadley, but once she got past all her assumptions regarding Wes, I truly appreciated her. I also adored Annalise and Benny, as well as Wes's teammates who were also his closest friends. Fingers crossed the rest of the St. Louis Mavericks series is as good as Hard Fall. 4.5 stars!
Release Date: 14 September 2021
Date Read: 13 September 2021
Learn more about Brenda Rothert and Kat Mizera.
Pre-order Hard Fall on Amazon | Apple Books | B&N | Kobo.